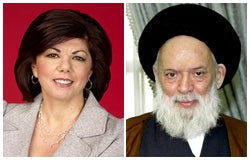 Following a tweet in which she praised late Hezbollah leader Sayyed Mohammed Hussein Fadlallah — and then a blog post explaining it — Octavia Nasr, CNN's senior editor of Mideast Affairs, is leaving the network.

Mediaite has the internal memo:

I had a conversation with Octavia this morning and I want to share with you that we have decided that she will be leaving the company. As you know, her tweet over the weekend created a wide reaction. As she has stated in her blog on CNN.com, she fully accepts that she should not have made such a simplistic comment without any context whatsoever. However, at this point, we believe that her credibility in her position as senior editor for Middle Eastern affairs has been compromised going forward.

As a colleague and friend we’re going to miss seeing Octavia everyday. She has been an extremely dedicated and committed part of our team. We thank Octavia for all of her hard work and we certainly wish her all the best.

Sad to hear of the passing of Sayyed Mohammad Hussein Fadlallah.. One of Hezbollah's giants I respect a lot. #Lebanon

Reaction to my tweet was immediate, overwhelming and a provides a good lesson on why 140 characters should not be used to comment on controversial or sensitive issues, especially those dealing with the Middle East.

It was an error of judgment for me to write such a simplistic comment and I'm sorry because it conveyed that I supported Fadlallah's life's work. That's not the case at all.

Here's what I should have conveyed more fully:

I used the words "respect" and "sad" because to me as a Middle Eastern woman, Fadlallah took a contrarian and pioneering stand among Shia clerics on woman's rights. He called for the abolition of the tribal system of "honor killing." He called the practice primitive and non-productive. He warned Muslim men that abuse of women was against Islam.

I met Fadlallah in 1990. He was willing to take the risk of meeting with a young Christian journalist from the Lebanese Broadcasting Corporation.

Nasr's explanation was not enough to save her 20-year career at CNN. In other words, by my rough math, that's 1.7 months per Twitter character, or 7 characters per year.