If you think CNN is having a good 2016, just wait until next year.

Time Warner CFO Howard M. Averill guaranteed record profits for the cable news channel in 2017, even after all this election craziness has come to a close.

How could that be possible? Well, next year, the network will see what he called a “significant” increase in affiliate fees — plus, digital should continue growing even as linear wilts. Finally, all of this election coverage isn’t cheap — what Averill referred to as “news-gathering costs” — and those expenses will be gone soon.

CNN has been surging due to what the Time Warner finance boss referred to as its three-part plan: 1) Going all-in on what Averill called “big news,” 2) Investing in the aforementioned digital, and 3) Making a commitment to original series, which attract totally different advertisers.

As such, the Turner channel has gained on Fox News Channel (FNC), inching closer to that coveted No. 1 slot in the key news demo than CNN has been in a decade. It’s also widening the gap over third-place MSNBC by roughly the same pace. In other words, CNN’s TV ratings among those 25-54 aren’t just increasing — share is. That should light a fire under the Roger Ailes-less FNC, which is already enjoying its highest-rated year-to-date ever.

Here’s a look at TWX’s overall stock performance over the past 12 months: 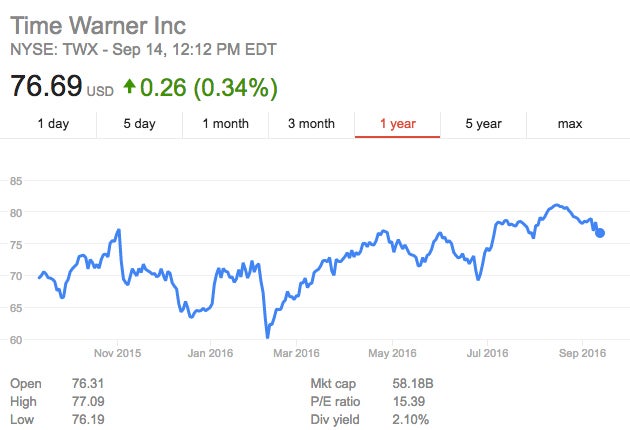 We’ll see what these peaks and valleys look like next year, and how much CNN is able to contribute.