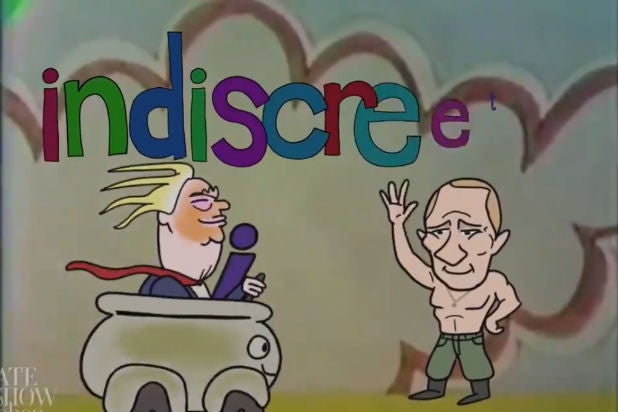 On Wednesday’s episode of “The Late Show,” Stephen Colbert had some fun at Donald Trump’s expense with a retro-style children’s cartoon song that suggested several words beginning with the letter ‘i’ — other than “impeachment” — that could describe the president.

The bit came after Colbert discussed the surprise press conference Trump held on Wednesday morning to complain about Democratic Party leadership, the Mueller investigation, and calls for him to be impeached. Trump didn’t actually refer to impeachment by name however; instead, he repeatedly called it “the I-word.”

For example, he said: “I hear last night, they’re going to have a meeting right before this meeting to talk about the I-word. The I-word. Can you imagine?”

After joking “I can,” Colbert rolled the video of the song, sung by his “The Late Show” band leader Jon Batiste, that offers up a long list of possible I-words and phrases that could apply to Trump.

Of course, the song is really catchy, and the cheesy 1970s-style animation is pretty fun too, so when you get the chance you really should give it a watch.

On #LSSC tonight: There are many words beginning with “I” that can describe the President. pic.twitter.com/kOgpO5Qt4J

And here’s the bit from his monologue talking about the press conference: