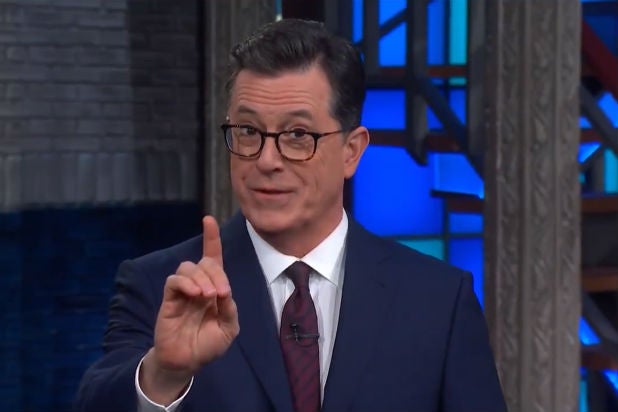 Stephen Colbert had a heartfelt, totally-not-sarcastic apology for Republicans on Monday’s episode of “The Late Show” — OK, that’s not true, but he did admit he was wrong about exactly one thing, after a GOP congressman said Donald Trump has done “impeachable” things.

During his opening monologue, Colbert brought up Justin Amash, a Michigan congressman who, after reading the Mueller report, said last weekend that Trump “has engaged in impeachable conduct.”

“So with that, I would like to offer the Republican Party this apology,” Colbert said. “Now, I know I give the GOP a hard time, and often imply that you’re a spineless group of self-interested toadies who would rather see the country destroyed then stand up to an out of control, narcissistic toddler.”

“I was wrong,” Colbert continued. “About one of you. One.”

“Well. Uh. Yeah, technically,” Colbert joked. “Like, technically in high school once we had a girl at our ‘Dungeons & Dragons’ party, but does it mean it was co-ed? No guys, I swear, there were a lot of girl there.

There’s plenty more, including a funny joke about Mitt Romney. Watch the whole thing below:

TONIGHT: There is a new call for impeachment and it's coming from inside Trump's own House of Representatives. #LSSC pic.twitter.com/xhMaWLGuKy