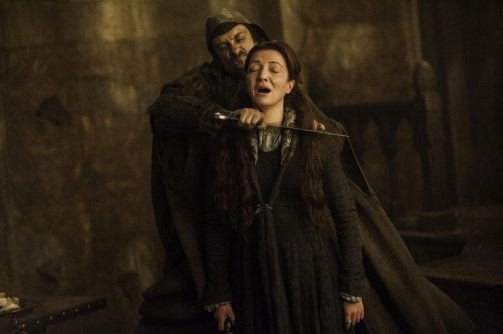 The creators of the HBO cult hit series "Game of Thrones" said they cried after filming the Red Wedding massacre, a crescendo moment in the complex tale of competing empires in which many characters were unexpectedly slain, and that this week was nominated for an Emmy.

A half-dozen of the many characters of "Game of Thrones" came to San Diego to meet an auditorium full of obsessive fans.

Also read: Comic-Con 2013: Vin Diesel Will Star in a Marvel Movie – Just Don't Ask Him About It

"It was a rough day when we wrapped the Red Wedding," said the show’s co-creator David Benioff. "I hugged Michelle (Fairley, who plays Catelyn Stark). The crew was crying. It’s such a testament to Michelle and Richard (Madden) …  that these fictional deaths had them on the set in tears. And they knew it was coming."

D.B. Weiss, the other co-creator, said the entire series had built up to that scene, and that the scene in the book by George R.R. Martin, left him shaken.

"I thought if we can do justice to the 'holy shit' of that moment and if people throw the remote control the way I threw my book, we would do something right," said Weiss. "It was exciting and terrifying, and I didn’t know if we could pull it off."

Madden, who played Robb Stark, said, "I cried quite a lot actually. … and I’m missing that a lot."

The much anticipated "Game of Thrones" panel opened with an In Memorium segment of all the characters who died in the past season – Lady Catelyn Stark, Ned Stark, Robb Stark, Talisa Stark and dozens, literally, of other characters, showed  in all their throat-slit and other moments of death.

"We always knew they were all going to die," said Weiss.

Many of the regular characters were at the panel, including Peter Dinklage, Michelle Fairley, Kit Harington, Richard Madden, Emilia Clarke (with dark brown hair) and author George R.R. Martin.