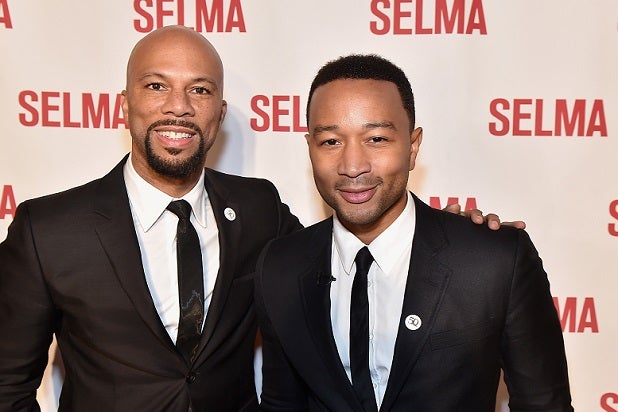 Common and John Legend are going to the Oscars — and not just as nominees.

The pair, whose song “Glory” from the film “Selma” is up for an Oscar, will perform the hit at this year’s ceremony, which will be hosted by Neil Patrick Harris on Feb. 22 and air live on ABC.

“Common and John Legend are artists who have always lifted our spirits and made us think,” said  show producers Craig Zadan and Neil Meron. “The Oscar stage is that much more profound because of their presence and we welcome them.”

The song, which mixes a gospel-style melody that hearkens back to the civil rights movement with a rap in which Common invokes recent events in Ferguson, Mo., is considered the frontrunner in the Oscar race for Best Original Song. It already won the Golden Globe in the song category.

As one of only two nominations for “Selma” (the other being Best Picture), the song is perhaps the easiest way for Oscar voters to show support for Ava DuVernay’s film.

As co-authors of the song, Legend and Common were nominated under their real names, John Stephens and Lonnie Lynn.

Common also appears in “Selma” as civil rights leader James Bevel. He and Legend will also perform “Glory” at this year’s Grammy Awards, which air on CBS on Feb. 8.

“Glory” will face off in the Original Song category against fellow nominees “Everything Is Awesome” from “The Lego Movie”; “Grateful” from “Beyond the Lights”; “I’m Not Gonna Miss You” from “Glen Campbell … I’ll Be Me”; and “Lost Stars” from “Begin Again.”

On Monday, Meron and Zadan announced that Adam Levine would perform “Lost Stars” on the show.