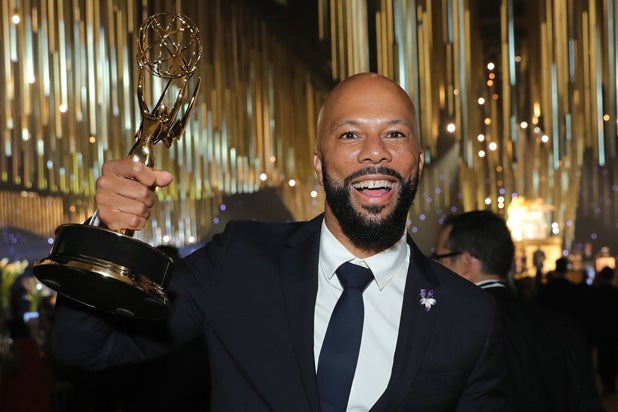 Common, the actor-songwriter-producer, won his first Emmy Award on Saturday for co-writing the song “Letter to the Free” for director Ava DuVernay’s award-winning Netflix documentary “13th.”

And that puts the artist, born in Chicago as Lonnie Rashid Lynn Jr., just a Tony Award shy of the coveted EGOT status.

Over the years, he’s earned three Grammy Awards, beginning in 2003 with Best R&B Song for “Love of My Life (An Ode to Hip-Hop)” with Erykah Badu. His song with Kanye West “Southside” won Best Rap Performance by a Duo or Group in 2008. And he won his third for “Glory” last year in the Best Song Written for Visual Media category.

On Saturday, he shared the Emmy for Outstanding Original Music and Lyrics for his “13th” song with Robert Glasper and Karriem Riggins. The award was presented at L.A.’s Microsoft Theater on the first night of the Creative Arts Emmys.

The politically charged track, which also appears on the rapper’s album “Black America Again,” is Common‘s second collaboration with the celebrated director.

“I believe the song will have life, because it’s relative to life,” Common told TheWrap last month. “It’s still going on in our society, so people that will come across the song or the film ’13th’ will see it’s relevance.”

After Saturday night’s win, he posted a message on Facebook: “#Blessed. I’m grateful to have won this #Emmy award last night for my song, ‘Letter to the Free,’ on Ava DuVernay 13TH. When the movement is strong, the music is strong. This #Emmy is really for the people who are incarcerated. We love you and we see you. I’ll continue to stand up for justice and equality.”

Meanwhile, Common’s “Selma” collaborator John Legend needs only an Emmy Award to join the elite group of EGOT winners after winning a Tony in June as a producer of the revival of the August Wilson play “Jitney.”

Rapper stops by TheWrap for a photo session and interview