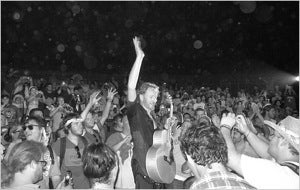 Seems so. Not only did the former "Tonight Show" host take the stage at Tennessee's famous Bonnaroo rock festival on Friday, but he spent Thursday night jamming with White Stripes frontman Jack White in Nashville.

Playing to packed houses on his "Legally Prohibited From Being Funny on Television Tour," O'Brien this week took his act to Tennessee.

On Thursday morning, he visited legendary Nashville music shop Gruhn Guitars. Afterwards, he wrote on his Twitter page, "They let me play through Buddy Holly's 1958 Magnatone amplifier. I am happy."

Then, that night, he stopped by Jack White's Third Man Records and played jammed in front of a crowd of about 300 with the White Stripes/Raconteurs/Dead Weather rocker on several songs, including covers of Elvis, Radiohead, Eddie Cochran and Willie Nelson. A vinyl record is planned of the show.

And Conan still wasn't done with Tennessee. On Friday afternoon, took "Legally Prohibited" to the Bonnaroo festival in Manchester (pictured above).

The Bonaroo lineup features a long lineup of musicians like Jay-Z, Stevie Wonder and the Dave Matthews Band alongside performances from comedians including O'Brien, Margaret Cho and Aziz Ansari.

His new late night-show for TBS debuts in November.