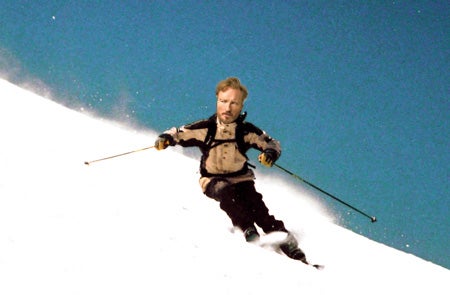 The question of the moment in media is simple: Where is Conan O’Brien gonna go now? Fox? Cable? The Internet?

Well, this seems as plausible as anything else.

Latching onto a discussion Conan had with Rob Lowe on the “Tonight Show,” a marketing-savvy heli-skiing company called “The Last Frontier” is offering the ginger-headed host a free seven-day package to ski chopper-accessed terrain in British Columbia.

Via the company’s blog:

During the program, the two discussed Lowe’s active outdoor lifestyle including his love of surfing and heliskiing. The exchange, which is in the video below, is hilarious. While Lowe tries to explain the process and thrill of the sport, Conan balks at the proposition and says he “doesn’t go outside.”

“NO, I’m not going! Anyone who knows me knows this is the last thing I’d do.”

Hey Coco! Let us change your mind here at Last Frontier Heliskiing. We invite you to try heliskiing at our heliski operation in Northern British Columbia, Canada. Come enjoy a 7-day heliskiing package (on us) so you can understand just what the hell Rob Lowe is talking about. After all, would the co-star of Wayne’s World lead you astray? Well, maybe he did with all that talk about avalanches, but have no worry. We have an impeccable safety record at Last Frontier and heliskiing is an extremely safe activity. We might not even need to throw an avalanche beacon on you…with that shining red beacon of your Irish heritage on your head, you’d probably be as good as found.

Fitting, since NBC did bury him.