There are few institutions more Goliathan than the NFL, but that doesn’t make the underdog story in “Concussion” any more compelling. The tale of one doctor’s crusade to tell the truth about the devastating consequences of chronic head injuries among football players is timely but dreary and dramatically inept. In fact, the film is pure Oscar bait, complete with a cornball monologue delivered by star Will Smith about what makes America great.

Playing David to the NFL’s Goliath is Smith’s Dr. Bennet Omalu. In lieu of a slingshot, the Pittsburgh coroner’s weapon of choice is a half-dozen post-graduate degrees, recited one by one in the opening scene.

In the autopsy room, Omalu is the kind of quirky detective so familiar on the small screen, cajoling cadavers in his lilting Nigerian accent, “Tell me what happened to you,” before cutting into them to figure out how they died. Once he pieces together that his latest corpse, a beloved NFL star, was “killed by football” via mental degeneration from a lifetime of brain injury, the good doctor turns grimly ponderous — and the film does, too. 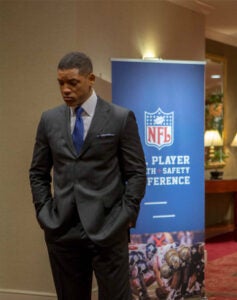 The thin plot finds Omalu searching for more evidence of football-induced dementia among players who don’t seem to live past 50 while he is persecuted by the NFL. Writer-director Peter Landesman (“Parkland”) doesn’t figure out how to stage this effectively; Smith often looks into a microscope slide, then squints at the air.

More gripping are the harrowing smaller scenes of anguished ex-players who know that there is something wrong with them, but don’t have the words or the diagnosis to explain the erratic, violent behavior they are shocked to find themselves experiencing.

Their crises of identity somewhat mirrors the one Omalu undergoes when he considers how the corporate cover-up of his research — with some assistance from Uncle Sam — grays his admiration for America, a nation he’s looked up to all of his life. But Omalu’s shifting feelings about his adopted homeland don’t really resonate, since the character, while based on a real person, is less a flesh-and-blood human than an idealization of an immigrant: educated, hardworking, virtuous, patriotic. Despite uneven accent work, Smith delivers a fine performance.

Pretty much everything else in “Concussion” feels requisite, from the montages of real-life athletes ramming their skulls together to the football-crazy ally (Alec Baldwin) and the much-younger love interest (Gugu Mbatha-Raw). The rising actress, so marvelous as the star of last year’s “Belle” and “Beyond the Lights,” is saddled with the film’s most tone-deaf monologue, which compares a couple of threatening phone calls from NFL defenders that Omalu receives to (what is heavily implied to be) her rape.

Representing a weaselly Roger Goodell is Luke Wilson (in a glorified cameo as the NFL commissioner). The league takes plenty of hits despite earlier reports that Sony had blunted the script’s criticisms of the NFL. “Concussion” ultimately avoids any radical conclusion; it simply advocates for players to know all they’re in for when they get on the field.

Still, for all its acknowledgements of football’s beauty, passion, and social and economic value, the film — which will debut just six weeks before the next Super Bowl — makes it unequivocal that going pro might well mean mental illness and an early death for the players. Whether that’s a fair trade-off is a conversation worth continuing to have. Too bad “Concussion” has so little to add to the discussion.