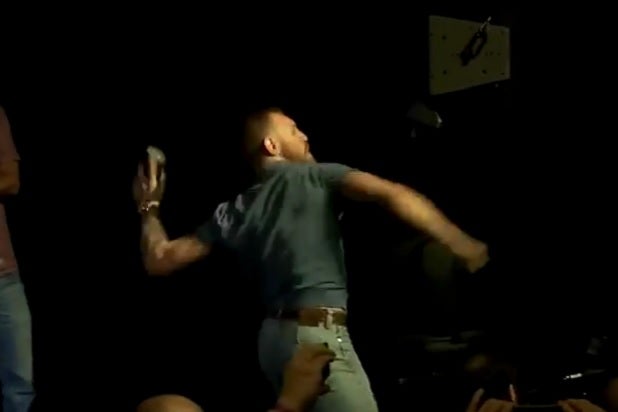 “What everybody’s gotta understand is we’re overseen by the Nevada State Athletic Commission,” White told TMZ Sports. “I guarantee both of these guys will get massive fines. And there’s probably gonna be a hearing too after the fight.”

He went on to say that fighters involved in Wednesday’s scuffle could face suspensions and community service for the incident, and that he has heard a lawsuit may be in the works from a bystander hit by one of the projectiles thrown inside the MGM Grand’s David Copperfield Theater.

White also denied any implication that this was a staged stunt to promote Saturday night’s rematch. “If you’re going to come up with something staged, throwing cans and bottles in a public place is probably one of the dumbest things you could come up with … They’re both in big trouble.

The incident occurred the press conference when Diaz walked out after McGregor showed up about 30 minutes late. As Diaz and his camp exited the room, he and McGregor continued to shout insults and obscenities at one another — and that’s when things escalated.

Diaz had nearly exited the theater when he turned and threw a water bottle towards McGregor. McGregor responded in kind and threw several bottles and energy drink cans of his own, with members of both camps following suit.

There has been mounting tension between the two since March, when Diaz stepped in with just 11 days notice to fight McGregor after the Irishman’s original UFC 196 opponent had to withdraw due to injury. McGregor, the champion in the 145-pound weight class, agreed to fight Diaz at 170 pounds. McGregor lost the fight in the second round via submission.

The two were supposed to fight again at UFC 200, but the bout was canceled as McGregor refused to fulfill media obligations leading up to the showdown.