When describing the new videogame, "Dragon Age: Origins" start with "The Fellowship of the Ring" and mix in a healthy dose of  "Brokeback Mountain." 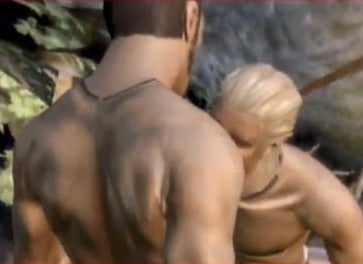 BioWare’s "Dragon Age" has been firing up the blogosphere — not because of its story of mythological warriors battling a race of demonic creatures called the DarkSpawn, but for its man-on-elf sex scene.

In the game, players can hook the hero up with a blond, bare-chested elf, and send the couple off for some privacy in the elf’s tent.

The game, which is available on XBox 360, Microsoft Windows, and PlayStation 3, is pretty tame in its depiction of elvish coitus by the campfire. There’s lots of plaintive looks, some gleaming pecs, matching loincloths and passionate kisses all set to music that sounds like bootleg Enya.

Still, the Medieval tomfoolery has drawn wildly diverse opinions from fans and commentators on the right and left. (For now, the game’s makers are keeping mum. A spokesperson for BioWare declined to comment for this article.)

Chelsea Schilling, writing in the conservative newspaper WorldNetDaily,said of the scene, "The two men are dirty, naked and kissing. They are depicted in various homosexual sex positions, and the clip concludes with the two nestling together and gazing into one another’s eyes."

Schilling’s critique may have fallen on deaf ears, however. Queerty, a gay website, responded by saying, "The Way "World Net Daily" Describes Gay Sex Is HOT!"

GayGamer, meanwhile, praised the scene as sensitvely composed and written: "With this bare-chested and unflinching portrayal, it feels as if the depiction of gay sex in videogames has reached a new level of equal treatment. This is more than just a mincing gay pirate (‘Temple of Elemental Evi’l) or an evasive fade-to-black: there’s choreography, tenderness, humor and even an element of sexual politics to Zevran’s post-coital conversation. Kudos to BioWare …"

The larger public has weighed in, too. A YouTube clip of the steamy elvin encounter drew over 300,000 viewers and prompted nearly 1,000 comments — many of them laced with blue language. There were some responses that steered away from the temptation to be profane to offer analysis and humor.

(Watch the video, but warning: It’s a little racy.)

"I hereby grant this the Entertaining to All Seal of Approval,﻿ on the merits of it being hilarious. Does the elf sound like Shrek’s Puss in Boots to anyone else?" MrsEssence commented.

And; "This is so sweet, im so glad videogames are brave enough to do﻿ this now," BlizzardCold101 wrote.

On the other hand, Burkevil commented:

"If i buy a game with pro-gay themes, I am supporting the gay agenda indirectly. I am simply turned off by homosexual love; just like many gays are turned off by heterosexual love, and don’t want to support that. I don’t call them ‘heterophobes’ for it. I respect their choice to object."

Even the late-night comics are weighing in. On the "Jimmy Kimmel Live!," the show host played a clip of the canoodling before quipping, "Oh Pac Man, where are you when we need you the most. A young Siegfried and Roy came together for that game."

Oddly enough, potentially the most controversial element of the hookup hasn’t elicited comment on either end of the political spectrum.

Nobody seemed to care that it wasn’t simply a scene of two men getting it on. Given the fact that one of the twosome was an elf, it also represents a cross-species coupling. Imagine!