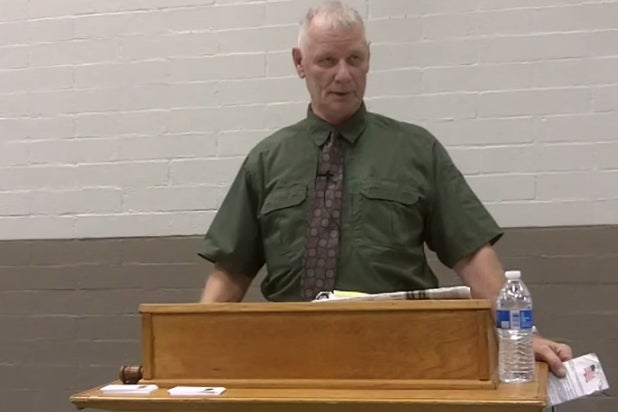 St. Louis County Police Officer Dan Page — who made headlines earlier this week when he pushed CNN reporter Don Lemon during a live report from Ferguson, Mo. — has been suspended for racist, sexist, homophobic remarks made on a video that has recently surfaced.

“With the comments on killing, that was obviously something that deeply disturbed me immediately,” Belmar said, referring to the speech made at St. Louis-St. Charles, Missouri Chapter of Oath Keepers. “Had he been a probationary officer doing the same thing, I would have fired him two hours ago.”

The hour-long-plus video is a rambling speech by the former Green Beret and current 35-year veteran of the St. Louis County PD, which boasts plenty of remarks on killing, but also contains plenty of material to offend or confuse people from various backgrounds.

“We had no business in passing hate crime laws,” Page said early in the clip, adding that it’s wrong to label certain groups as “special.” He then calls gays in the military “sickening” and “pitiful.” The veteran also railed against women in the Army and he was just warming up.

Other comments include: “Muslims are passive until they gain parity with you or they exceed you in numbers and they will kill you…  I’m into diversity. I kill everybody, I don’t care.”

Around the 52-minute mark, Page warns women to relax with this “domestic violence stuff,” and that husbands and wives who don’t get along should “just shoot each other and get it over with.”

At one point in the video, Page complains about how his original birth certificate referred to him as a “caucasian” male, but a newer one labels him a “white” male. He calls President Barack Obama an “illegal alien.”

Page also warns the crowd that the government has a new Constitution ready to go, and calls four Supreme Court judges “homosexual sodomites.” Along with the new Constitution will be a newly blended world Army to kill all of us, according to Page. The suspended cop also rails against sports fans.

Later in the video, Page exclaims: “I personally believe in Jesus Christ as my lord savior, but I’m also a killer. I’ve killed a lot. And if I need to, I’ll kill a whole bunch more. If you don’t want to get killed, don’t show up in front of me, it’s that simple. I have no problem with it. God did not raise me to be a coward.”

Midway through the speech, Page tells the audience that he is “not afraid of a man in [the room].” Glancing into the crowd at no one in particular, he said, “You don’t intimidate me.”

On his theory that the world will be divided into 10 regions by the year 2020, Page said: “There’s gonna be a lot of blood folks, because you’re looking at one 60-year-old man who ain’t gonna go along with it.” He then added. “Been there done that. If I die, I go to Heaven. What are they gonna do, kill me? Hell, I died a long time ago.”

Later, Page promised that the crowd’s kids will be taken by the government and placed in “indoctrination camps.” He’s not sure when but it’s “imminent.”

Glendale officer Matthew Pappert was also suspended after posting on social media that he thought the Ferguson protesters should be “put down like rabid dogs.”

Of course, that seems like child’s play compared to the below embedded Page speech.

Watch the rambling and confusing speech in the video below: