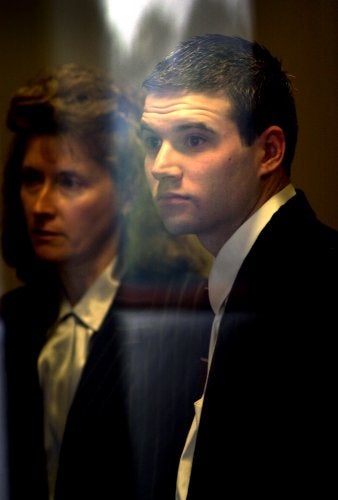 Officers were summoned to the 4700 block of Allott Ave. in Sherman Oaks at 12:20 a.m. to investigate an alarm call. Once on the scene they “spotted a man walking out of a back door.” The cops tried to speak to the 31-year-old Reagan (pictured here in an older photograph), who is the son of conservative talk-radio host Michael Reagan and the grandson of the late President Ronald Reagan.

Reagan immediately became belligerent and uncooperative and had to be arrested by force. He was taken to the jail in Van Nuys, where he remains, with bail set at $10,000.

The LAPD Media Relations office would not release the exact address Reagan was seen leaving. The residential neighbor is very close to the 101 Freeway, below Riverside Drive.

Cameron Reagan’s previous brushes with the law include a 1999 conviction for breaking into a car and, also, for receiving stolen property – the latter charge was dropped by prosecutors. A 2000 pot bust earned him a probation violation, which resulted in Reagan being ordered into a three-month drug-and-anger program.