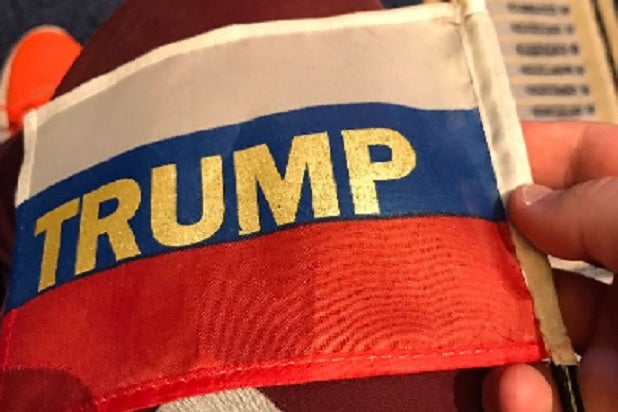 The day President Donald Trump addressed the Conservative Political Action Conference (CPAC), there were numerous people in the crowd waving tiny flags that bore a striking resemblance to the Russian flag.

“Crowd at CPAC waving these little pro-Trump flags that look exactly like the Russian flag,” reported Peter Hamby, a former CNN reporter and current head of news for Snapchat. “Staffers quickly come around to confiscate them.” It is unclear at this time, however, if the flags were meant to be pro-Trump or distributed as a form of protest.

Questions of the Trump administration’s ties to Russia have dogged the President both during and after his election. The New York Times previously reported that members of Trump’s presidential campaign and their associates had repeated contact with senior Russian intelligence officials in the year before the presidential election, according to phone records and intercepted calls.

The FBI also closely examined at least three other people connected to Trump’s White House bid: businessman and former foreign policy adviser Page, Republican operative Roger Stone, and and former national security adviser Michael Flynn. However, it is not known if their calls were intercepted.

Flynn resigned from his post after less than a month, admitting that he gave “incomplete information” about a call he had with the Russian ambassador to the U.S. last December regarding sanctions against Russia, and that he misled Vice President Mike Pence and other top White House officials about the conversation.

Crowd at CPAC waving these little pro-Trump flags that look exactly like the Russian flag. Staffers quickly come around to confiscate them. pic.twitter.com/YhPpkwFCNc

You can’t make this stuff up. Flag handed out at CPAC today on left. Russian flag on right. pic.twitter.com/zaXp11ZSXH