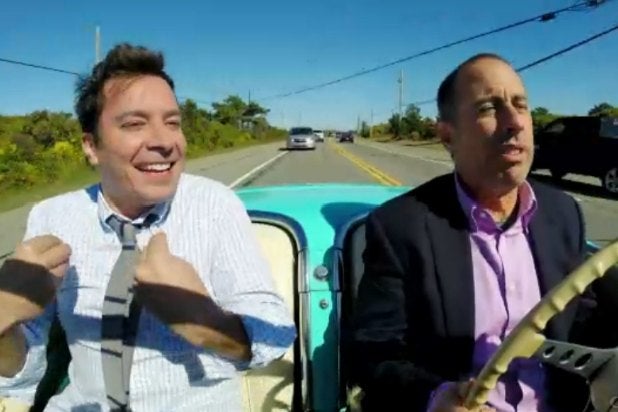 Crackle just made its Upfronts debut, where the digital network announced its first-ever one-hour scripted series “The Art of More,” starring Dennis Quaid, and animated comedy “SuperMansion” among other projects.

As previously reported, more “Comedians in Cars Getting Coffee” is coming, and David Spade is putting his mullet wig back on for “Joe Dirt 2: Beautiful Loser.” The film is the first made-for-digital sequel to a major motion picture, Crackle boasted on Tuesday.

Crackle also presented its new “Always On” experience at the ad sales event. Here is the company’s official description of its new service, powered by Adobe Primetime:

As soon as a viewer launches the new Crackle, a scheduled program will immediately begin playing. Consumers can browse for something else in the newly created channel guide while continuing to watch what’s currently playing. Rolling out exclusively on the Roku platform beginning in May and a variety of other platforms throughout the summer, the innovative new design combines the curated experience of streaming programming on demand with the simplicity of a programmed TV experience.

“At Crackle, we are reimagining ad-supported TV,” said Eric Berger, executive vice president of Digital Networks for Sony Pictures Television and general manager, Crackle. “With compelling programming and an innovative new viewing experience, Crackle is the perfect combination of linear television and on demand that provides advertisers with additive solutions that capitalize on the best of both worlds.”

Here is the full Crackle slate, in the digital network’s own words:

“Joe Dirt 2: Beautiful Loser”
Scheduled to Premiere July 16th
In this sequel to the 2001 cult favorite, David Spade (“Rules of Engagement”) returns as the mullet-wearing, rock and roll loving, down on his luck white-trash-hero who embarks on another epic journey, this time through the recent past, the heartland of America – and his own mind – to get back to his loved ones. Joe Dirt is back with a vengeance, and a mop. Spade reprises his role alongside Oscar winner Christopher Walken, Brittany Daniel (“The Game”), Dennis Miller, Adam Beach. Patrick Warburton (“Rules of Engagement”), Mark McGrath, Charlotte McKinney (“Dancing with the Stars”) and Kevin Farley also star in the sequel.
Director, Writer and Producer: Fred Wolf
Writer and Producer: David Spade
Produced by Happy Madison Productions and Lifeboat Productions

“The Art of More”
Scheduled to Premiere Winter 2015
10 episodes
“The Art Of More” is a groundbreaking drama starring Dennis Quaid (“Vegas”) that goes into the underbelly and surprisingly cutthroat world of premium auction houses. We follow a blue collar young man, Graham Connor, played by Christian Cooke (“Magic City”) who leverages his way into this exclusive realm by exploiting connections to antiquities smuggling rings he was exposed to as a soldier in Iraq. Kate Bosworth plays the role of Roxanna Whitney, daughter of the CEO of one of the two warring auction houses — and a leading account executive. Although she was born into this exclusive world and thrives in it, she is riddled with insecurities that drive her to be a formidable executive in her own right.
Writers and Executive Producers: Gardner Stern (“Las Vegas,” “Law and Order”) and Chuck Rose
Executive Producers: Dennis Quaid, Laurence Mark and Gary Fleder “The Shield”)

“Capo”
Nick Capelli emerges from prison into a world where his once strong mafia family — and the very fabric of Italian organized crime itself — has eroded, leaving him with no direction, but an uncontrollable need to try to recreate his past life. But this time it’s going to be different … In the modern world where the mafia doesn’t command respect like it used to, “Capo” takes a look at what it would take for a modern crime organization to rise today.
Produced by Relativity Television and Hollywood Gang Productions
Executive Producers: Tom Forman, Andrew Marcus, Ray Ricord, Gianni Nunnari and Shannon Gaulding

“Chosen”
10 episodes
Premieres Winter 2016
Continuing the story of Ian Mitchell (Ventimiglia) and his family, the second season of “Chosen” goes deeper into the deadly game the Mitchells were swept into and follows the lives of others who also received mysterious boxes forcing them to kill — or else — including new character Jacob Orr (Murray). The second season of six half-hour episodes ensures to pack more thrills, suspense and jaw-dropping moments.
Executive Producers: Milo Ventimiglia (“Heroes”), Ben Ketai, Ryan Lewis and Russ Cundiff