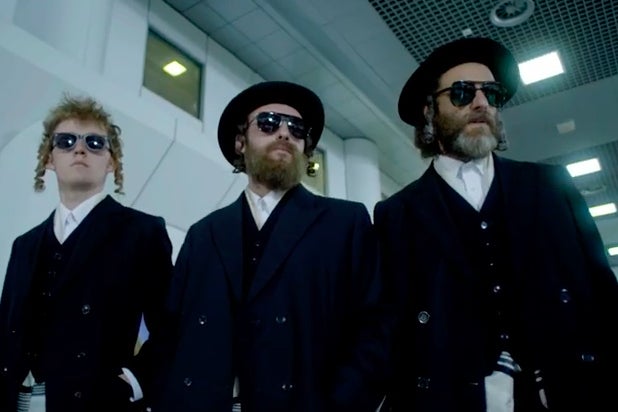 The former home to Jerry Seinfeld’s “Comedians in Cars Getting Coffee” also went on a bit of a greenlight frenzy. For starters, Crackle is teaming up with rapper 50 Cent on two projects. The first, scripted drama “The Oath,” will be executive produced by Curtis Jackson — that’s the emcee’s real name. The original series, which focuses on secret societies inside the police force, is created and written by former Los Angeles County Sheriff’s deputy Joe Halpin.

Additionally, Crackle closed a deal with the rapper/actor on hour-long drama “RPM,” which follows a used car salesman who starts moonlighting as a getaway driver for a Boston crime syndicate after financial ruin threatens his family.

Crackle has also announced the launch of a weekly highlights show this summer, which will be hosted by YouTube star and Smosh founding member Ian Hecox. “This Week On” will exist on new Crackle vertical, Crackle Spotlight.

On the movie front, Crackle has given the go-ahead to Brian Kavanaugh-Jones and Tim Kring for techno-thriller “In The Cloud,” which explores a tech company shrouded in secrecy as it develops software capable of uploading a person’s consciousness and memories to a virtual space regardless of location, time, and state of life.

Crackle’s got some early series development going as well — below are three shows being worked on, with each description in the Sony company’s own words.

“Accident Park”
When an unambitious but lovable hometown zero, Vern, uses the settlement from a personal injury lawsuit to buy the notoriously dangerous local theme park where he was injured, he realizes that he needs help to keep his new business afloat. The comedy begins when the park’s new owner, Vern, enlists the extremely reluctant help of Grant, his best friend from high school who has moved back in with his mom after a spectacular professional flame out on Wall Street.

“Tribes”
This one-hour original drama series takes us 20 years into the future when a nano-virus has ravaged the West Coast of the United States. Shut off from the rest world, the inhabitants inside this quarantined zone have reverted back to tribal culture. Until one tribe comes across an ‘elder’ – the first human they have seen over the age of 30 since the outbreak – this man may hold the clues to the cure of this deadly virus – a cure that can set them all free – but some tribes don’t want their world to change.

The series is adapted from the popular 2010 graphic novel by Michael Geszel and Peter Spinetta for IDW Publishing and SoulCraft Comics. The series is written by Alex Tse (Watchmen), who will also serve as an executive producer along with Joel Silver’s Silver Pictures (The Matrix, Die Hard, Veronica Mars).

“The Row”
This one-hour scripted drama, centers around a select group of death row inmates who are about to be given a choice about what they want to do with the rest of their lives – continue their miserable existences on death row or be sent on an experimental mission with a 1% chance of survival. The 1% survival rate has never sounded so good to the inmates who are only too eager to take their chances in space because all of them think that they can find their way out.

The series is created and written by Michael Polish (The Astronaut Farmer) who will also direct and executive produce alongside Kate Bosworth under their production banner, Make Pictures.