The boxing drama “Creed” is coming through like a champ in its debut at the box office over the Thanksgiving weekend.

However, it won’t catch “The Hunger Games: Mockingjay – Part 2,” which will win the five-day weekend with around $75 million, or “The Good Dinosaur,” the Pixar Animation family film that will be the runner-up with around $55 million through Sunday for Disney. “Mockingjay,” the finale in Lionsgate’s young adult franchise starring Jennifer Lawrence, took in $21.5 million Friday, double its $10.4 million Thanksgiving Day haul.

But the “Rocky” revival is going to punch out north of $40 million over the five days and deliver the best opening of any of the six sequels in the 39-year-old franchise. The MGM/New Line Cinema saga distributed by Warner Bros. will go over its $35 million production budget by roughly $5 million by Sunday.

Also Read: All 7 Rocky Movies Ranked, From the Original to 'Creed' (Photos)

That means the well-reviewed “Creed,” which will take in around $29 million between Friday and Sunday, is now a commercial success, too.

“They don’t make movies as unabashedly emotional as this very often these days, and as well-executed as it is, I’d expect it to connect,” Exhibitor Relations media analysts Jeff Bock told TheWrap.

“Creed” has been a critical hit for some time — earning 93 percent on Rotten Tomatoes — and the strong debut won’t hush any of the awards buzz surrounding the film, which has long-shot chance to be nominated for a Best Picture Oscar. Leading man Jordan and writer-director Ryan Coogler — who teamed for the critical hit “Fruitvale Station” two years ago — are also in the awards discussion. 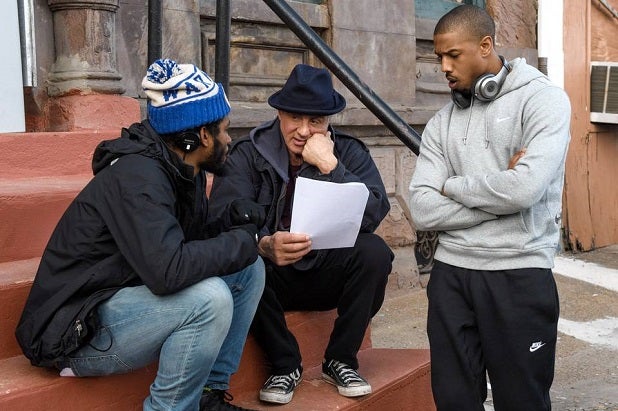 So is Sylvester Stallone (photo above, on set with Coogler and Jordan), who produced as well as co-stars in “Creed,” which features the son of Rocky’s rival-turned pal Apollo Creed heading for Philadelphia to seek out Balboa (Stallone) for guidance.

The success of “Creed” is a high note for distributor Warner Bros., which hasn’t had many of those this year, and it gets the fading franchise off the mat. The last film in the series was “Rocky V,” which topped out at $80 million domestically in 1990. And it is a big win for producers Irwin Winkler and Robert Chartoff, who produced the original “Rocky.”

That film, written and directed by Stallone, had a budget of just over $1 million and was shot in 28 days. It became one of the all-time box-office sleepers, earning $225 million globally and was the highest-grossing film of 1976. “Rocky” won three Oscars, including Best Picture.