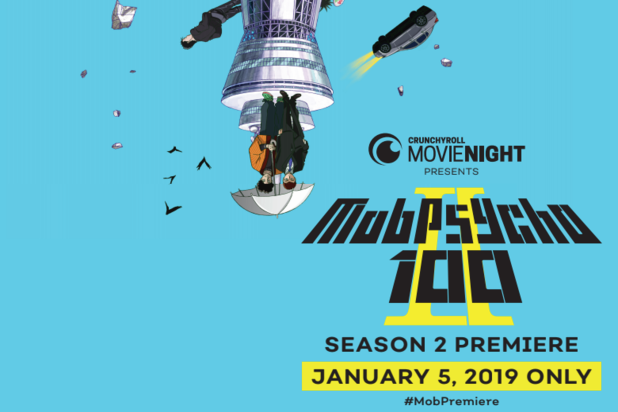 “Mob Psycho 100,” the anime series from the niche streaming platform Crunchyroll, is coming to theaters for a one night event. The “Movie Night,” as the Crunchyroll is calling it, is the result of a partnership between the streamer and Fathom Events, which broadcasts events in movie theaters throughout the U.S.

The partnership between the companies will include at least four separate screenings throughout 2019. The first will offer fans an exclusive sneak peek of the first episode of “Mob Psycho 100 II”Season 2 on Jan. 5 starting at 12:55 p.m. local time. This event will include a recap of the first season of the series and a cameo from Setsuo Ito, the voice actor behind the main character Shigeo Kageyama (Mob).

“There are so many great animation titles that deserve a chance to shine on the big screen,” said Fathom Events CEO Ray Nutt. “We’re looking forward to working with Crunchyroll to put more of their films in front of cinema audiences, and give the fanbase an opportunity to experience it together.”

Tickets for the Crunchyroll Movie Night will go on sale starting Friday, Dec. 7, with over 500 cinemas participating nationwide. Crunchyroll subscribers will receive early access to tickets for the event on Wednesday.

This partnership builds on Crunchyroll’s growing offering outside of streaming content via OTT, expanding its revenue stream beyond subscriptions and advertisements. The company, which is owned by AT&T through Ellation, also has an owned and operated convention, Crunchyroll Expo, which wrapped its second year in San Jose in September, and several video games — including “DanMachi: MEMORIA FREESE” and “Bungo Stray Dogs: Tales of the Lost!” — currently out on the market.