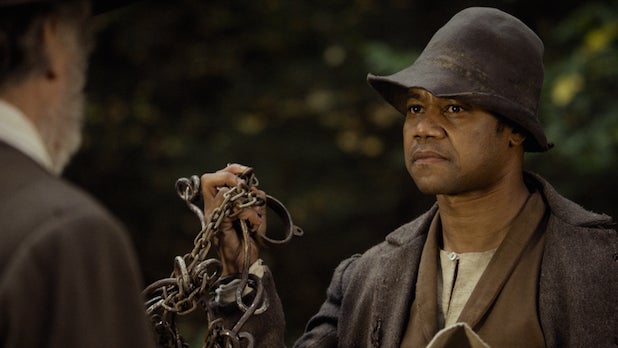 ARC Entertainment has acquired all U.S. rights to the family drama “Freedom,” which stars Oscar winner Cuba Gooding Jr. as a slave, it was announced Tuesday by the company’s head of acquisitions, Scott Moesta.

Peter Cousens directed from a script by Timothy A. Chey, and the film co-stars William Sadler (“The Shawshank Redemption”), Sharon Leal (“Guiding Light”), David Rasche (“Men in Black 3”), Terrence Mann (“Critters”) and Michael Goodwin (“Stuck in Love”). ARC Entertainment will be releasing the film on VOD, digital and in theaters on June 5.

“Freedom” tells the true story of two men separated by 100 years who are united in their search for freedom. In 1856, a slave named Samuel Woodward (Gooding Jr.) and his family escape from the Monroe Plantation near Richmond, Virginia. A secret network of ordinary people known as the Underground Railroad guide the family on their journey north to Canada. They are relentlessly pursued by the notorious slave hunter Plimpton (Sadler). Hunted like a dog and haunted by the unthinkable suffering he and his people have endured, Samuel is forced to decide between revenge or freedom.

100 years earlier, in 1748, John Newton, the Captain of a slave trader, sails from Africa with a cargo of slaves, bound for America. On board is Samuel’s great-grandfather, whose survival is tied to the fate of Captain Newton. The voyage changes Newton’s life forever and he writes the song “Amazing Grace,” creating a legacy that will inspire Samuel and the lives of millions for generations to come.

Cousens produced the film with Michael Goodin and Sheila Rabizadeh, while Gooding Jr. was among the executive producers.

“I was initially drawn to ‘Freedom’ because of the great cast and storyline, but when I screened the film I knew ARC had to have it. Director Peter Cousens did such an amazing job bringing to life this epic story, and we’re absolutely thrilled to have the opportunity to share ‘Freedom’ with audiences around the country,” said Moesta, who negotiated the deal for ARC with Brendan Styles on behalf of the filmmakers.