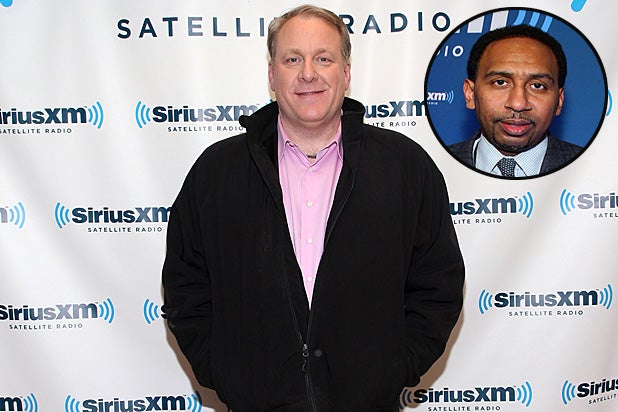 Curt Schilling has been accused of being racist — and homophobic and transphobic — in the past, and now he is throwing the accusation back at Stephen A. Smith in a bizarre radio interview rant.

“What am I going to debate about? I have no interest,” Schilling said, in reference to Smith’s offer of a debate earlier this week following Schilling’s repeated claims that Smith believes that Robert Griffin III lost the Washington Redskins quarterback job because of his race, which Smith denies ever saying.

“There’s nothing to debate, No. 1., and No. 2, there’s not a chance in hell that I would do anything that would bring that station another viewer, ever.”

The offer that Schilling so bluntly refuted was made by Smith on Monday during his Sirius XM radio show. “You [Schilling] want to sit here and have a debate about what really went on?” he asked. “Name the time and place and I’ll show up — with the permission of ESPN, of course. I guess listening to my boss makes me a bad guy. Well guess what? I’d rather be bad than stupid.”

Schilling had not taken kindly to Smith pointing out why he had been released by the sports giant, as he told him via SXM. “Let me speak up on behalf of ESPN when I say this to Curt Schilling: You are gone not because you have conservative views instead of liberal views. Your ass is gone because you did not want to listen,” Smith said.

“ESPN tells me to shut up,” Smith added. “They’re my employer whether I like it or not. If I want to keep my job, I’ve got to shut the hell up.”

Schilling, a three-time World Series winner and former “Monday Night Baseball” analyst, was fired by ESPN in April after he posted a meme on Facebook mocking transgender women.

The post, which was quickly deleted, was captioned: “A man is a man no matter what they call themselves. I don’t care what they are, who they sleep with, men’s room was designed for the penis, women’s not so much. Now you need laws telling us differently? Pathetic.”

When the meme sparked an outcry on social media, Schilling responded with a lengthy post on his blog, doubling down on his actions by addressing “all of you out there who are just dying to be offended so you can create some sort of faux cause to rally behind.”

The anti-transgender comments followed a series of missteps by the former Boston Red Sox and Philadelphia Phillies pitcher.

In March, he aired his grievances over Hillary Clinton’s use of a private computer server to send classified information, telling Kansas City’s 610 sports radio listeners that the presidential candidate “should be buried under a jail somewhere.” ESPN investigated the matter, as the company had previously sent a memo to its employees urging them not to comment on the presidential race.

After joining ESPN in April 2010, Schilling was removed from the network’s baseball coverage last season following a controversial tweet in August 2015 comparing Muslims to Nazis. He was replaced by MLB analyst Jessica Mendoza.

Schilling had tweeted a photo of Adolf Hitler and the words: “It’s said only 5-10% of Muslims are extremists. In 1940, only 7% of Germans were Nazis. How’d that go?” He accompanied the picture with the caption, “The math is staggering when you get to the true #s.”

“Curt’s tweet was completely unacceptable, and in no way represents our company’s perspective,” the sports network said in a statement at the time.