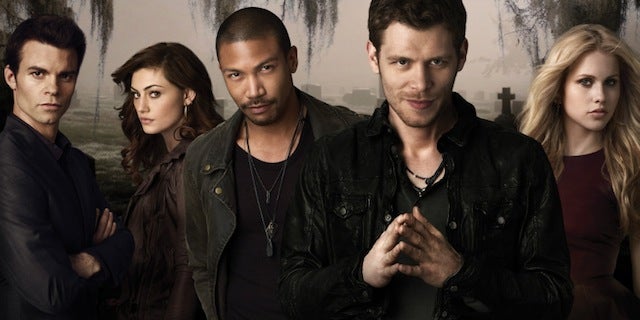 After presenting its 2013-2014 upfront schedule to advertisers on Thursday, The CW released first looks at its new series.

Watch the videos below along with the network's official descriptions.

“Reign”: Hidden between the lines of the history books is the story of Mary Stuart, the young woman the world would come to know as Mary, Queen of Scots. Queen of Scotland since she was six days old, the teenage Mary is already a headstrong monarch – beautiful, passionate, and poised at the very beginning of her tumultuous rise to power. Arriving in France with four close friends as her ladies-in-waiting, Mary has been sent to secure Scotland’s strategic alliance by formalizing her arranged engagement to the French king’s dashing son, Prince Francis. But the match isn’t signed and sealed, it depends more on politics, religion and secret agendas than affairs of the heart. Prince Francis is intrigued by the fiery Scot, but like most young men, he resists the idea of settling down into marriage, especially when he has a history with a lady of the court and his own point of view on the wisdom of an alliance with Scotland. Still, an attraction between Mary and Francis is ignited. Further complicating things is Bash, Francis’ roguish half-brother, who has a history of his own – despite his illegitimate birth, Bash is his father’s favorite. And now that Bash has caught Mary’s eye, a royal triangle may be forming. While at French Court, fierce foes and dark forces conspire to sabotage Mary’s marriage to Francis and even threaten her life, until a mysterious shrouded guide becomes her ally. With danger and sexual intrigue around every dark castle corner, Mary rallies her ladies-in-waiting and steels herself, ready to rule the new land and balance the demands of her country and her heart.

"The Originals": Family is power. The Original Vampire family swore it to each other a thousand years ago. They pledged to remain together, always and forever. Now, centuries have passed and the bonds of family are broken. Time, tragedy and hunger for power have torn the Original Family apart. When Klaus Mikaelson, the original vampire-werewolf hybrid, receives a mysterious tip that a plot is brewing against him in the supernatural melting pot that is the French Quarter of New Orleans, he returns to the city his family helped build. Klaus’ questions lead him to a reunion with his diabolical former protégé, Marcel, a charismatic vampire who has total control over the human and supernatural inhabitants of New Orleans. Determined to help his brother find redemption, Elijah follows Klaus and soon learns that the werewolf Hayley has also come to the French Quarter searching for clues to her family history, and has fallen into the hands of a powerful witch named Sophie. Tensions between the town’s supernatural factions are nearing a breaking point as Marcel commands his devoted followers and rules with absolute power. For Klaus, the thought of answering to his powerful protégé is unthinkable, and he vows to reclaim what was once his – the power, the city and his family. While they wait to see if their sister Rebekah will leave Mystic Falls and join them, Klaus and Elijah form an uneasy alliance with the witches to ensure that New Orleans will be ruled by THE ORIGINALS once again.

"The Tomorrow People": They are the next evolutionary leap of mankind, a generation of humans born with paranormal abilities – the Tomorrow People. Stephen Jameson stands at the crossroads between the world we know and the shifting world of the future. Up until a year ago, Stephen was a “normal” teenager – until he began hearing voices and teleporting in his sleep, never knowing where he might wake up. Now, Stephen’s issues have gone far beyond the usual teenage angst, and he is beginning to question his sanity. In desperation, Stephen decides to listen to one of the voices in his head, and it leads him to his first encounter with the Tomorrow People – John, Cara and Russell – a genetically advanced race with the abilities of telekinesis, teleportation and telepathic communication. The Tomorrow People are being hunted down by a paramilitary group of scientists known as Ultra. Led by Dr. Jedikiah Price, Ultra sees the Tomorrow People as a very real existential threat from a rival species, and the outcast group has been forced to hide out in an abandoned subway station just beneath the surface of the human world. Trading in secrets, Jedikiah offers Stephen the chance for a normal life with his family and best friend, Astrid, if he will help in the struggle to isolate and eradicate the Tomorrow People. On the other hand, Cara, John and Russell offer Stephen a different type of family and a home where he truly belongs. Unwilling to turn his back on humanity or the world of the Tomorrow People, Stephen sets out on his own path – a journey that could take him into the shadowy past to uncover the truth about his father’s mysterious disappearance, or into an unknown future with THE TOMORROW PEOPLE.

"Star-Crossed": When Emery was 6 years old, an alien spacecraft crash-landed in her small town. Whether they came in peace or with more sinister intentions didn’t matter: a fierce battle erupted as humans fought for control over their new rivals, an alien species called the Atrians. In the midst of the conflict, Roman, a 6-year-old Atrian boy, found his way to a shed behind Emery’s house, where she protected him from harm, bringing him food, comfort – and friendship. In their brief time together, Emery and Roman forged a deep bond, but the authorities wasted no time tracking Roman down and capturing him in a violent confrontation. Emery has grown up believing that Roman was killed that day. Ten years later, the Atrians have been acclimated to life on Earth, but they are interned in a heavily-guarded camp known as the Sector to keep them separate from humans. Now, for the first time, a group of Atrian teens will enroll in a suburban human high school, with the goal of testing the feasibility of human/alien integration. The eyes of the nation and the whole world are fixed on this historical social experiment, an endeavor fraught with suspicion and fear. In the mayhem of the first day, Emery is amazed to learn that Roman was not killed by the authorities and is, in fact, one of the Atrian students. Their childhood bond is quickly rekindled – in a school and a society that distrusts everything about the Atrians, Emery and Roman have found each other again. However, their relationship is threatened by the small-mindedness of their respective communities and the political agendas of people in power. While the world around them rages with anger and prejudice, their bond becomes increasingly strong and increasingly dangerous. As an epic Romeo and Juliet romance unfolds, a violent encounter between Roman’s father and Emery’s father occurs in the Sector. Can Roman and Emery’s love – and peace between the species – survive?

"The 100": Ninety-seven years ago, nuclear Armageddon decimated planet Earth, destroying civilization. The only survivors were the 400 inhabitants of 12 international space stations that were in orbit at the time. Three generations have been born in space, the survivors now number 4,000, and resources are running out on their dying “Ark” – the 12 stations now linked together and repurposed to keep the survivors alive. Draconian measures including capital punishment and population control are the order of the day, as the leaders of the Ark take ruthless steps to ensure their future, including secretly exiling a group of 100 juvenile prisoners to the Earth’s surface to test whether it’s habitable. For the first time in nearly a century, humans have returned to planet Earth. Among the 100 exiles are Clarke, the bright teenage daughter of the Ark’s chief medical officer; Wells, son of the Ark’s Chancellor; the daredevil Finn; and the brother/sister duo Bellamy and Octavia, whose illegal sibling status has always led them to flaunt the rules. Technologically blind to what’s happening on the planet below them, the Ark’s leaders – Clarke’s widowed mother, Abby; the Chancellor, Jaha; and his shadowy second in command, Kane – are faced with difficult decisions about life, death and the continued existence of the human race. For the 100 young people on Earth, however, the alien planet they’ve never known is a mysterious realm that can be magical one moment and lethal the next. With the survival of the human race entirely in their hands, THE 100 must find a way to transcend their differences, unite and forge a new path on a wildly changed Earth that’s primitive, intense and teeming with the unknown.