“The Daily Show” turned the choicest quotes from White House Communications Director Anthony Scaramucci’s Wednesday night rant to The New Yorker reporter Ryan Lizza into the kind of cheesy motivational posters you might see in a middle school hallway or dentist’s office.

The F-bombed filled posters were inspired by a piece published in The New Yorker on Thursday by Lizza that detailed a conversation with Scaramucci in which the new White House staffer unloaded his contempt for Chief of Staff Reince Priebus, advisor Steve Bannon and anyone who is leaking information from the White House.

“I’m not Steve Bannon, I’m not trying to suck my own c—,” is paired with the word “Honesty” and a sunset over a calm body of water. “What I want to do is I want to f—ing kill all the leakers,” is next to the word “Determination” and a picture of the open road.

A cliff and the word “Honesty” goes along with the quote “Reince is a f—ing  paranoid schizophrenic, a paranoiac.” And finally, a sunlit forest and the word “Commitment” go with “Yeah, let me go, though, because I gotta start tweeting some s— to make this guy crazy.”

After the conversation with Lizza, Scaramucci tweeted, “In light of the leak of my financial info which is a felony. I will be contacting @FBI and the @TheJusticeDept #swamp @Reince45.” The tweet has now been deleted, and Scaramucci took to the cable news circuit to backpedal the idea that he and Reince have a problem with each other.

“When I put out a tweet and I put Reince’s name in a tweet, they all make the assumption that it’s him because journalists know who the leakers are,” Scaramucci told CNN’s Chris Cuomo.

Scaramucci continued: “So if Reince wants to explain he’s not a leaker, let him do that. But let me tell you about myself. I’m a straight shooter and I’ll go right to the heart of the matter.”

“The Daily Show” capped off their “motivational” Twitter thread with “#MoochMotivation” as a response to another Scaramucci tweet: “I sometimes use colorful language. I will refrain in this arena but not give up the passionate fight for @realDonaldTrump’s agenda. #MAGA.” Colorful, indeed.

I sometimes use colorful language. I will refrain in this arena but not give up the passionate fight for @realDonaldTrump's agenda. #MAGA

See pictures of the posters below. 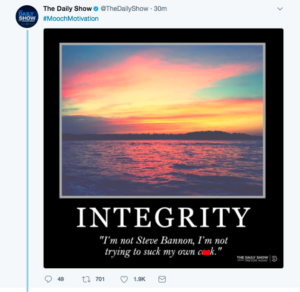 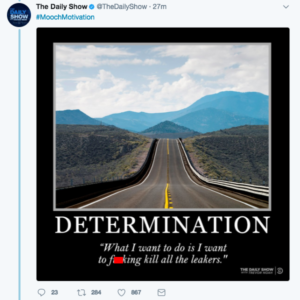 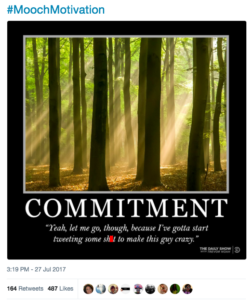 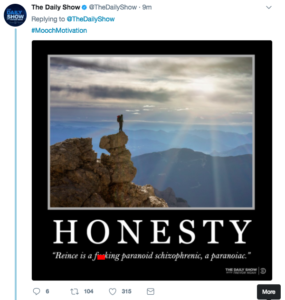