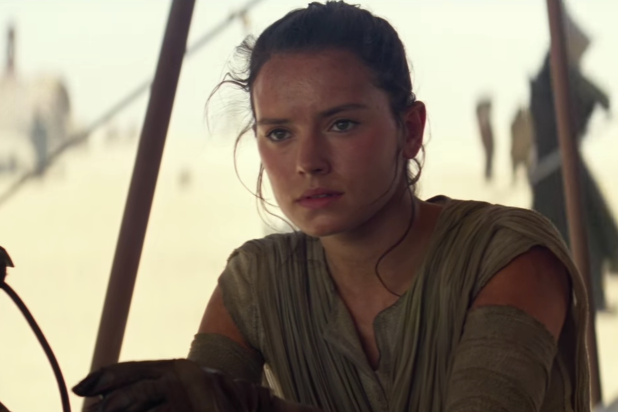 Daisy Ridley is saying that after the current “Star Wars” trilogy has wrapped, she’s hanging up her lightsaber for good.

In a recent interview with Rolling Stone, the star said she “didn’t really know what I was signing on to,” when she agreed to do “The Force Awakens.”

“I hadn’t read the script, but from what I could tell, it was really nice people involved, so I was just like, ‘Awesome.’ Now I think I am even luckier than I knew then, to be part of something that feels so like coming home now,” she said.

When asked if she’d continue to play Rey after the third movie, she definitively said, “No. No, no, no,” adding, “I am really, really excited to do the third thing and round it out, because ultimately, what I was signing on to was three films. So, in my head, it’s three films. I think it will feel like the right time to round it out.”

As for making a cameo in a reboot 30 years from now, Ridley said anything can happen… but she’s not entirely sure earthlings will be around for another “Star Wars” reboot.

“Who knows? I honestly feel like the world may end in the next 30 years, so, if in 30 years we are not living underground in a series of interconnected cells … then sure. Maybe,” she said. “But again, it’s like, who knows. Because the thing I thought was so amazing, was people really wanted it. And it was done by people who really love it.”

There’s no doubt Ridley has loved the galaxy far, far away. “It’s somewhat a reflection of society,” Ridley said of the beloved universe. “But also it is escapism, because there are creatures and there are people running around with f—ing lasers and shit. So, I think, a wonderful mix of both.”