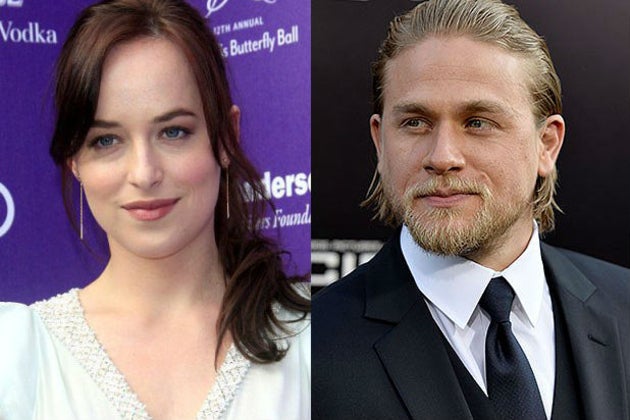 They are Dakota Johnson, an unknown actress with big-name parents – actors Don Johnson and Melanie Griffith – who will play the lead female character Anastasia Steele in Universal Pictures and Focus Features’ film adaptation of “Fifty Shades of Grey.”

And Charlie Hunnam, the star of “Sons of Anarchy,” who has been cast to play the kinky 27-year old billionaire Christian Grey who inducts Anastasia into a world of bondage.

TheWrap first broke the news that Johnson was the favorite for the widely coveted but very sexual role. Writer EL James confirmed the news by tweeting it on Sunday, and within a few minutes tweeted that Hunnam had been cast as the male lead.

Not only is Johnson the 23-year old daughter of Johnson and Griffith, she is the step-daughter of Antonio Banderas and the granddaughter of “The Birds” star Tippi Hedren. She has had supporting roles in films like “The Five-Year Engagement” and “21 Jump Street,” but this is far and away her biggest performance and acting challenge.

It’s a bold choice for Focus and Universal in what has been a series of daring decisions related to the film version of the best-seller. The studios also defied expectations by entrusting the potential franchise to a relatively untested director, Sam Taylor-Johnson (“Nowhere Boy”).

TheWrap has learned that Hunnam closed his deal more than a week ago, though Universal and Focus have kept his casting under wraps as they continued their search for the female lead. In addition to his “Anarchy” role, Hunnam starred in this summer’s “Pacific Rim.”

Before that, producers Michael De Luca and Dana Brunetti handed the source material – which started as “Twilight” fan fiction and is not heralded for its fine writing – to screenwriter Kelly Marcel, a writer/producer on Fox’s failed “Terra Nova” series before “Saving Mr. Banks,” her first credited screenplay, made waves in Hollywood.

Johnson started out as an IMG model before transitioning to acting and launching a movie career, including a memorable scene with Justin Timberlake in “The Social Network.”

By all accounts, the part of Anastasia Steele is a potential star-maker, which means there’s limited upside for an established star; and the chosen actress will have to be comfortable with onscreen nudity and kinky sex. Johnson may not be a household name, but as a former model, she’s already comfortable flaunting her body for the camera.

She is represented by WME and Management 360.