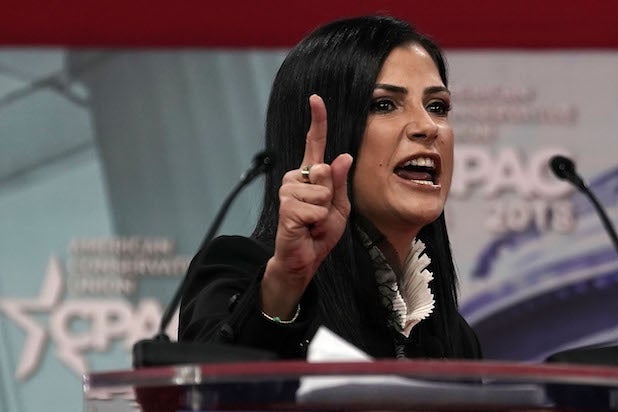 Dana Loesch is facing new scrutiny after internet sleuths dug up an old tweet from the NRA spokesperson that some have called anti-Semitic.

“I bet Rick Sanchez was fired by a Jew,” she tweeted in 2010 around the time CNN dismissed the anchor following remarks he made calling “Daily Show” host Jon Stewart a “bigot” and suggesting that Jews run CNN and “all the other networks.”

The tweet lay dormant in Loesch’s timeline for years until resurfacing in late February, initially by Israeli media outlets such as Haaretz and The Times of Israel.

Loesch deleted the tweet last month after it began to go viral, according to Snopes.com, but an internet archived version of the Tweet can be viewed here. 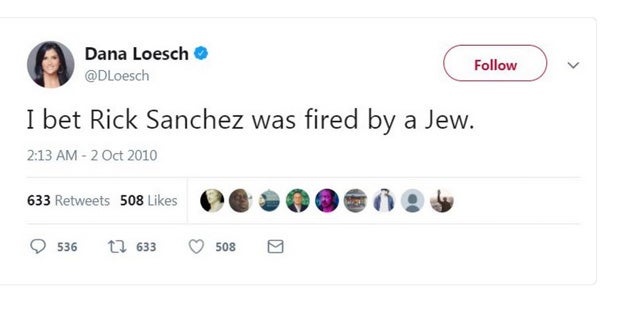 Also Read: 'Fox & Friends' to NRA's Dana Loesch: 'No One Had It Worse Than You' (Video)

The NRA did not immediately respond to request for comment from TheWrap Friday morning.

As she often does, Loesch took matters into her own hands on Twitter.

In a series of statements, she suggested the tweet was actually noting “an epic form of poetic justice” against a “garbage bigot” like Sanchez.

“Still not apologizing for hoping a garbage bigot was fired by someone against whom he was bigoted in an epic form of poetic justice,” she wrote to comedian Sarah Silverman, who had called her out on Twitter.

Helpful flashback context for your attempt to deflect from my credible points made today. Thanx for giving me another opportunity to remind people of the disgraceful bigots in our media. Feel free to RT @brofax unless you endorse this antisemitic trash. https://t.co/Nm03Efhln7 pic.twitter.com/JTzYXUy6IZ

And no, I’m not apologizing for hoping an garbage person antisemite was fired by someone whom he loathed. If you all want to defend that, knock yourselves out.

Just a reminder. Still not apologizing for hoping a garbage bigot was fired by someone against whom he was bigoted in an epic form of poetic justice. Defend his nastiness all you want.

“Dana, is there context here, bc this looks super duper no bones about it antisemitic and that can’t be true, can it,” Silverman had asked in her tweet.

But the comedian seemed satisfied with Loesch’s response. “Hey y’all @DLoesch was making a joke about Rick Sanchez saying the Jews run the media,” she wrote in a follow-up tweet. “It was out of context and that’s the true context.”

Dana, is there context here bc this looks super duper no bones about it antisemitic and that can’t be true, can it?? @nra https://t.co/M8hGYt9knt

Hey y’all @DLoesch was making a joke about Rick Sanchez saying the Jews run the media. It was out of context and that’s the true context. Peace https://t.co/HRDCjRbDfX

But others have not been so forgiving.

Just goes to show how bad a failed mommy blogger turned NRA spokesperson gets when they want to seem like the cool mom but cant help being antisemitic too! Heres to you Dana Loesch! @DLoesch i bet @JustinRoiland and @danharmon would love knowing you are a fan. pic.twitter.com/Ha9ymqHt11

The backstory of the tweet dates to the firing of former CNN anchor Rick Sanchez. In a different media era, Sanchez was once a staple on the news network, appearing regularly on his two-hour weekday show “Rick’s List.”

Sanchez’s career at CNN was abruptly ended after the anchor took a shot at “Daily Show” host Jon Stewart on the Sirius XM radio show “Stand Up With Pete Dominick” in September 2010.

Stewart had been a frequent critic of Sanchez, along with many of his on-air colleagues across cable news. In the interview, Sanchez said the “Daily Show” host was a “bigot.”

“He’s upset that someone of my ilk is almost at his level,” said Sanchez.

When Dominick noted that Stewart — as a Jewish American — was also a member of a minority group, Sanchez scoffed at the suggestion.

“Yeah, very powerless people,” he said, laughing. “He’s such a minority. I mean, you know, please. What, are you kidding? I’m telling you that everybody who runs CNN is a lot like Stewart, and a lot of people who run all the other networks are a lot like Stewart,” he said. “And to imply that somehow they, the people in this country who are Jewish, are an oppressed minority…”

Sanchez was out a day later. You can watch a contemporaneous ABC News recap of his implosion below.