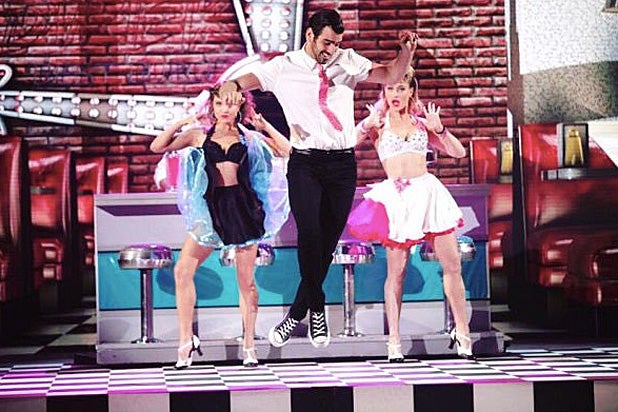 There was twice the risk on Monday when two couples were eliminated from “Dancing With the Stars” on semifinals night.

The contestants also faced double the pressure as they had to dance twice, including the complicated Trio Challenge where they were joined by another pro.

Also Read: 'Dancing With the Stars': Nyle DiMarco Dances in Silence as Another Contestant Gets the Boot (Video)

“Shut the front door, it is on,” judge Carrie Ann Inaba told the MMA fighter.

VanZant also sparked the most awkward moment of the night, when co-host Erin Andrews fueled rumors of a romance between Paige and Alan by commenting on the size of his peacock feathers.

Boyz II Men singer Wanya Morris had a rough time last week — including when he slipped on a dropped bandana — which he admitted made him “feel useless,” so Monday night was all about boosting his confidence again.

Also Read: Paige VanZant Talks Up 'Dancing With the Stars' Chances: 'Hey, I Could Win This' (Video)

While the judges loved his Paso Doble with Lindsay Arnold and Witney Carson, it was too little, too late.

“Beautifully handled,” Bruno Tonioli told him, while Len Goodman said: “It is amazing how you have developed as a dancer and a performer … great job.”

Once again, Brown’s comeback was too late ind there wasn’t enough time on the clock to save the NFL star from elimination.

“GMA” weather anchor Ginger Zee also performed a Paso Doble with Val Chmerkovskiy and Artem Chigvintsev. The trio described themselves as “honey, mustard and chicken nugget,” and while it may sound like a fattening combination of fast food, their dance was flawless and scored a perfect score.

“It was one of the most intense and surreal Paso Dobles I have ever seen,” Tonioli told them.

Nyle DiMarco’s retro jive with Peta Murgatroyd and Jenna Johnson to the backdrop of a ’50s-style soda shop was called a little “hectic” but had “the innocent charm of child’s play,” Tonioli said, as the judges acknowledged that it’s one of the most difficult dances.

Later in the night, the deaf “America’s Next Top Model” contestant danced blindfolded in a challenge that cut off another of his senses.

See video below of his blindfolded Tango.

Fighter and dancer stops by TheWrap for interview and photo session

Paige VanZant, "Dancing With the Stars"