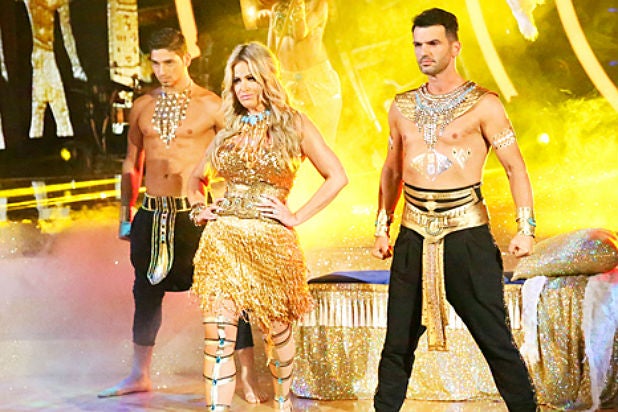 (Spoiler alert: Please do not read if you haven’t watched Monday’s episode of “Dancing With the Stars”)

After host Tom Bergeron popped up in their premiere episode last week, “The Muppets” made a special appearance  on “Dancing With the Stars” Monday with Kermit the Frog directing the ABC show and Miss Piggy taking over from Erin Andrews to introduce the “TV night” theme.

Notably absent from the studio was “Real Housewives of Atlanta” star Kim Zolciak-Biermann, who suffered a mini-stroke on her flight home from Los Angeles following last week’s show.

“I had a blood clot, which caused a mini-stroke,” Zolciak-Biermann, 37, revealed in a video clip. “Then I ended up being in the hospital for three days… if I can dance and I get a clean bill of health, I absolutely will. But my health comes first.”

Unfortunately, the reality star wasn’t allowed to fly from Atlanta to L.A. because of the health risks of being in a pressurized cabin, so her partner Tony Dovolani danced with a stand-in.

Sadly, the rules of the competition state that “in the instance of illness or other health-related matters affecting their ability to participate,” contestants must withdraw, Bergeron explained.

“I can dance, but I just can’t fly,” Zolciak-Biermann said, and despite pleas from both Kim and Tony, Bergeron stated that the lawyers wouldn’t allow them to bend the rules so the former Housewife is off the show.

Meanwhile, Season 19 winner Alfonso Ribeiro was back as a guest judge to critique the performances including that of a very exhausted Paula Deen, who recreated the nautical theme from “Gilligan’s Island.” Sadly, “the Samba got stranded by the shipwreck,” judge Bruno Tonioli told the celebrity chef.

Tamar Braxton and Val Chmerkovskiy teamed up to recreate the 1960s glamour of “Mad Men.” “That was must-see TV, that was sick,” gushed judge Carrie Ann Inaba.

Alex Pena Vegas and Mark Ballas went into the lab to mix up a jazz routine to “Breaking Bad’s” theme, complete with a hazmat suit and mask.

Also Read: 'Dancing With the Stars' Delivers Crushing First Elimination of the Season

Fan favorites Bindi Irwin and Derek Hough had to change their theme of “The Jetsons” to “The Jeffersons” at the last minute because the music wasn’t cleared to use, and both the new dance and Bindi’s injured foot prompted poor scores from the judges.

Paula Deen and Andy Grammer were at risk for elimination, but thanks to Zolciak-Biermann’s health problems, the star contestants got a lucky break and will return next week.

“Dancing With the Stars” airs Mondays at 8 p.m. on ABC