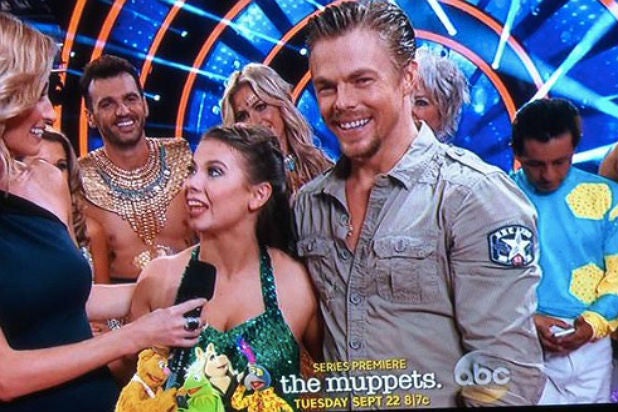 (Spoiler alert: Please do not read on if you haven’t watched Monday’s season premiere of “Dancing With the Stars”)

It was a 21st celebration on a fabulous scale on Monday when Season 21 of “Dancing With the Stars” kicked up it’s sparkly heels.

The list of contestants on the ABC reality competition is eclectic to say the least, with a 15-year-old YouTube star, a 71-year-old Oscar-nominated actor, an outspoken celebrity chef, a heroic Army serviceman and a Triple Crown-winning jockey among the contestants competing for the Mirror Ball Trophy.

Controversial and often crazy, Busey was described as “a bit rough” by his partner Anna Trebunskaya but the actor charmed the judges and landed himself in the top group.

Another surprise headline-grabbing pick by ABC was Deen, who seemed to enjoy nothing more than shoving her partner Louis van Amstel’s face into her ample bosom while performing a slow-moving Quickstep, before revealing that she may have soiled her previously white underwear in a very TMI moment.

An early favorite among both judges and viewers was Bindi Irwin, the lovable daughter of late “Crocodile Hunter” star Steve Irwin. She is paired with fan favorite, Derek Hough, and her bubbly personality could take her far beyond her talent. “I think for me, Dad will always be my superhero,” Irwin said during rehearsals. “You know, everything I do in life is to make him proud and to carry on his legacy.”

Reality diva Zolciak proved to be just as dramatic in the dance contest as she was on the Bravo show, landing her near the bottom of the scoreboard.

Nick Carter, meanwhile, proved he’s still got his Backstreet Boy skills when he turned both partner Sharna Burgess and the female judges into blushing school girls.

American Pharoah’s jockey Espinoza admitted to Karina Smirnoff that he had trouble learning the moves due to all the concussions he’s suffered destroying his short-term memory. Wearing racing silks and a sparkly helmet, his grinding performance was called “fun and interesting” by Hough.

“There was no salsa, but I give you credit for the galloping and horsing around,” Inaba said.

Braxton was partnered with the reigning “DWTS” champion Val Chmerkovskiy, who is coming off a Season 20 victory with Rumer Willis and had a strong start with his new partner that “blew away” the judges.

Singer Chaka Khan had no trouble remembering the lyrics to go along with her dance at least, as she performed to her hit song “I Feel for You,” but she struggled with the choreography.

See video of Busey’s performance below.