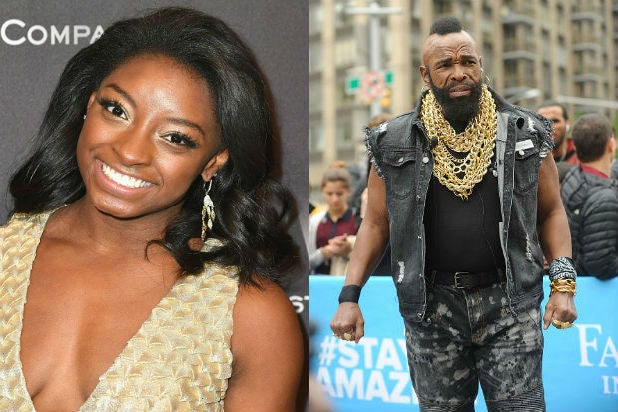 The “Dancing With the Stars” Season 24 cast was revealed Wednesday, with Olympic gymnast Simone Biles and iconic onscreen tough Mr. T among the contestants.

The season premiere, which will air on March 20 on ABC, will mark the 400th episode of the series. Check out the full list of contestants below.

Bolton, a professonal bull rider, rose to fame after he was paralyzed following a horrific accident after which doctors gave him a one percent chance to walk again. During his recovery, he was signed by IMG Models and has gone on to be featured in several major ad campaigns and photo shoots.

Charo is instantly recognizable by her trademark expression, “Cuchi-Cuchi,” which has endeared her to millions around the world. She has recorded several hit disco albums, including “La Salsa” and “Flamenco Salsa.” The single, “Cuchi Cuchi,” went platinum and became a hit in nightclubs worldwide.

Kattan is best known for his many characters on “Saturday Night Live,” which he joined in March 1996, completing his seventh and final season in 2003. His work on the show inspired the film “Night at the Roxbury,” in which he co-starred with Will Ferrell.

Jayne hit the dance club scene with 2007’s “Rollercoaster,” which quickly hit number one on Billboard’s Hot Dance Club Play chart, followed by eight more number one singles. In 2015, she joined the cast of “Real Housewives of Beverly Hills.”

Morris is both an actress and dancer. She is best known for her role as Brittany Pierce on Fox’s hit series, “Glee,” and she also appeared in the feature film “Spring Breakers.”

Mr. T rose to fame with the reputation as one of the world’s toughest bouncers. He parlayed that success into a job as a bodyguard for numerous celebrities, which eventually led him into acting. He famously played Clubber Lang in “Rocky III” and B.A. Baracus in the TV series “The A Team.”

Kerrigan is an internationally recognized figure skater who has medaled in countless national and world skating competitions. She was infamously the victim of an assault orchestrated by fellow skater Tonya Harding shortly before the 1994 Winter Olympics.

Viall was previously a contestant on “The Bachelor,” in which he got rejected by Bachelorette Andi Dorfman just as he was preparing to pick out a ring for her.

Kordei is one-fourth of one of the most popular girl groups in the world, Fifth Harmony. In 2015 Fifth Harmony released their debut album, “Reflection,” which debuted at number five on the Billboard 200 and has since been certified gold. “Reflection” includes two platinum records, “BO$$” and “Sledgehammer,” in addition to the quadruple-platinum success of the single “Worth It.”

Jennings was ranked one of the number one NFL safeties in 2015. In a breakout season in 2015, he started every game and set career highs in carries, rushing yards, receiving yards and receiving touchdowns. He was drafted in 2009 in the seventh round by the Jacksonville Jaguars, where he spent four seasons, was signed by the Oakland Radars in 2013 for one season, and signed a four-year contract with the New York Giants in 2014.

Biles, at just 19, is already recognized as one of the most successful gymnasts of all time. Her career highlights include being an Olympic Gold medalist in vault, floor, Individual and Team All-Around, and a Bronze medalist on Beam at the 2016 Rio Olympics. She won the All-Around by a 2.1 margin of victory, larger than the margins of victory from 1980-2012 combined.