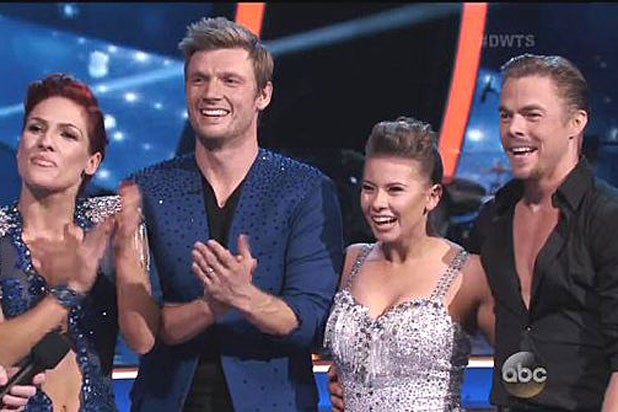 (Spoiler alert: Please do not read on if you haven’t watched Monday’s episode of “Dancing With the Stars“)

Following Tamar Braxton’s surprise exit for health reasons last week, it is getting down to the wire on “Dancing With the Stars.”

Alek Skarlatos, Bindi Irwin, Carlos PenaVega and Nickre all competing for the Season 21 Mirrorball trophy, and Monday’s semifinal episode saw an unexpected shake up at the top of the leaderboard.

The contestants had to endure three grueling rounds of challenges — individual dances, the trio dances and the dance-off — before next week’s finale.

Fan favorites Bindi Irwin and Nicwere dumbstruck when they both ended up in jeopardy at the bottom of the scoreboard, but they escaped elimination because of Braxton’s abrupt departure after being hospitalized for pneumonia.

Earlier in the show, Irwin kicked off the competition with a Salsa that was described by judge Julianne Hough as the “perfect way to start the semifinals.”

Also Read: Tamar Braxton Exits 'Dancing With the Stars' Due to Health Problems

Having been at risk on a number of occasions in the past, Army National Guardsman Skarlatos pulled off a perfect score for his Waltz to “America the Beautiful” with Lindsay Arnold.

Before he hit the dance floor, Alek’s fellow heroes in the Paris train attack last August, Spencer Stone and Anthony Sadler, shared their stories of how they ended up tackling a terrorist en route from France to Amsterdam.

Host Tom Bergeron then sent out a dedication to the victims of the latest terrorist attack to rock the European nation. “Before we get to the scores, I think it’s safe to say that all of our thoughts and prayers have been with the people of Paris this weekend. I couldn’t help but think that for you and Spencer and Anthony, that couldn’t be more visibly true,” he told Skarlatos.

“Absolutely, stuff like that has really been hitting home lately,” Skarlatos agreed. “France has had a tough year since Charlie Hebdo, my heart just goes out to everyone in France.”

He was then rewarded for all his hard work by being told his performance was “his best ever,” with Bruno Tonioli describing him as “a gliding eagle.”

Backstreet Boy  has earned high scores in recent weeks, but his first dance Monday didn’t bode well for the near future.

Meanwhile, PenaVega danced for the first time since his wife Alexa was eliminated last week, and got mixed responses from the judges.

The entire cast will return next week for the two-night finale, part of which will be filmed outside at L.A.’s The Grove shopping center with a special performance by Meghan Trainor.

“Dancing With the Stars” two-night finale airs next Monday and Tuesday at 8 p.m. on ABC.