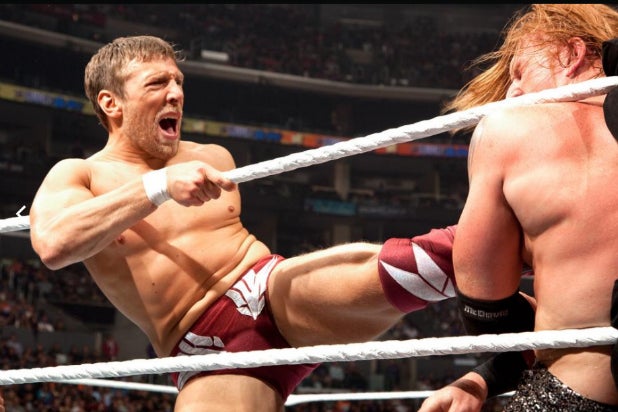 The day so many in the WWE Universe hoped they would see is actually upon us: Daniel Bryan is an active Superstar once more.

The fan favorite and current “SmackDown Live” general manager has been medically cleared by WWE to wrestle again — and just in time for WrestleMania 34. Bryan does not yet have an opponent for next month’s WrestleMania 34, but you better believe Vince McMahon & co. are scrambling to make that happen.

The undersized Bryan’s in-ring career was shut down two years ago following a series of concussions. Now, he’s got the thumbs-up from numerous neurologists, WWE says.

“Following more than two years of extensive evaluations, WWE Superstar Daniel Bryan has been medically cleared to return to in-ring competition by leading neurosurgeons, neurologists and concussion experts, including Dr. Robert Cantu, Dr. Javier Cárdenas and Dr. Jeffrey Kutcher,” WWE said in a statement on Tuesday. “Bryan underwent a full review of his medical history and received comprehensive neurological and physical evaluations independent of WWE. He was cleared by each doctor as well as WWE’s Medical Director, Dr. Joseph Maroon.”

TheWrap spoke with Bryan last June about his battle to return to in-ring action. At the time, he was frustrated with WWE’s decision to bench him, but understood executives’ reasons from a liability aspect.

“I’m not convinced that there is anything the WWE could hear that would change their opinions. The difficulty is in the testing for concussion protocols — there’s too much liability involved,” he told us at the time. “Everybody agrees that they think my brain is fine now, right? But there’s nothing to say that if something else happens, something bad couldn’t happen.”

Read more from our candid interview with Bryan here.

Also Read: Triple H on Daniel Bryan's Fight to Return to WWE Ring: 'There Will Be No Exceptions'

In January, we asked WWE Superstar and executive Paul “Triple H” Levesque about Bryan’s fight to fight again. The part-time wrestler and EVP of WWE Talent told us the following:

There can be no exception medically. If the belief is that he’s not healthy enough and there’s a risk [for him] to perform, then I don’t know why you’d allow him to step into the ring unless it can be proven otherwise. There will be no exceptions.

We have some of the best medical people in the world that work for us. Our wellness policy, our concussion programming, our protocols — I’ll put them up there against any on the planet.

That is a new science in a way, too. So we’re gonna look at it from all aspects, but the medical experts will make the determination as to whether he can ever step into that ring or not.

Look, personally for him, I know it would be something he would love to do, and part of me feels like I hope he has that opportunity. But at the same point in time, he’s married and has a child. Certainly, [we put] the human being first.

See Bryan tonight on USA Network’s “SmackDown Live,” which airs at 8/7c, and *probably* April 8 at WrestleMania 34 in New Orleans.