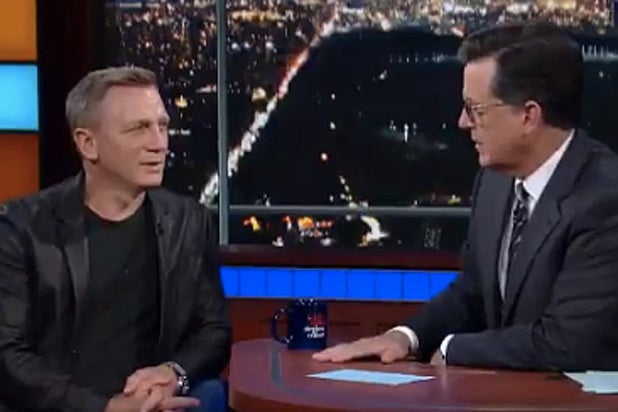 Daniel Craig had good news for 007 fans on Tuesday night.

The actor confirmed to Stephen Colbert that he is returning as James Bond. “I always wanted to,” Craig told the CBS late-night host.

Colbert began the interview by telling his guest that he thought he was the “greatest Bond ever,” and then went on to address the constant speculation over whether he would return to the iconic role, including a July report in the New York Times.

“I have been quite cagey about it, I’ve been doing interviews all day and people have been asking me about it and I think I’ve been rather coy,” the “Casino Royale” star said. “But I thought if I was going to speak the truth, I should speak the truth to you,” he added, which sparked cheers from the audience.

“We could do with some good news here,” Colbert rightly said following the day’s events, before asking him the golden question directly.

“Yes,” was the definitive answer.

“We’ve been discussing it, we’ve just been trying to figure things out,” Craig went on to say, adding that he had known for a couple of months. “I always wanted to, I needed a break.”

The as-yet-untitled 25th Bond movie will mark Craig’s fifth time as the martini-drinking British Secret Service agent, but it will also be his last. “I just want to go out on a high note.”

TONIGHT: Daniel Craig makes an announcement that will leave you shaken, not stirred. #JamesBond #LSSC pic.twitter.com/gaSgVs3LkN

He is now the second longest serving James Bond, surpassed only by the late Roger Moore, having appeared in “Casino Royale,” “Quantum of Solace,” “Skyfall” “Spectre.”

Franchise producers Barbara Broccoli and Michael G. Wilson of EON Productions, announced that the 25th James Bond film will hit the U.S. on Nov. 8, 2019. It will rollout in Europe one week prior, keeping with tradition.