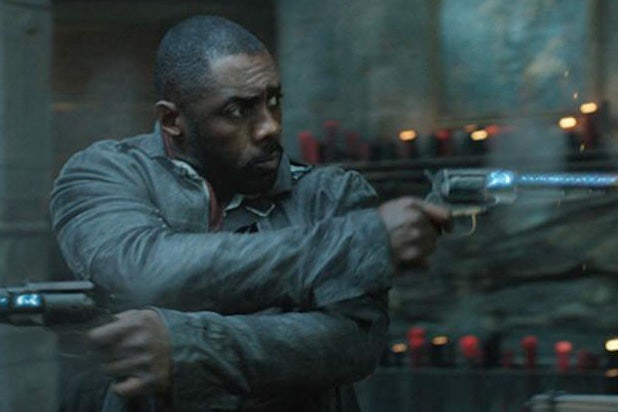 The first trailer for the Idris Elba-Matthew McConaughey movie “The Dark Tower” dropped on Wednesday, and fans of the beloved Stephen King book series on which it’s based were divided about what they saw.

“I actually almost teared up a little,” tweeted one fan, while others screen-grabbed shout-outs to other Stephen King projects in the trailer, including a brief glimpse of a photograph of the Overlook Hotel from “The Shining.”

But some fans took a dimmer view of the first peek at the adaptation. “Not where my imagination took me while reading the books … Looks disappointing,” wrote one.

“‘The Dark Tower’ trailer looks like a remake of Arnold Schwarzenegger’s movie ‘The Last Action Hero,'” another griped.

And some fans worried about how much the movie seems to depart from the source material — even though the trailer won praise (“awesome”) from King himself.

The Sony release, which is directed by Danish filmmaker Nikolaj Arcel, stars Idris Elba as Roland Deschain, a.k.a. The Gunslinger, a roaming knight of the Old West who resides in a parallel dimension known as Mid-World.

He crosses paths with Jake Chambers (Tom Taylor), an 11-year-old New Yorker with wanderlust who accidentally crosses over into Mid-World.

Together, the two go on a quest to save Mid-World from destruction, hoping to reach the titular Dark Tower and stop a dark sorcerer (Matthew McConaughey) from using it to control infinite worlds.

King is producing the film with Ron Howard, Brian Grazer and Akiva Goldsman, who is also sharing writing credit with Arcel, Jeff Pinkner and Anders Thomas Jensen. This is the first major piece of promotional material for the Columbia Pictures film, which has yet to release a trailer.

https://t.co/0nLzNnidrX Not where my imagination took me while reading the books… Looks disappointing. #TheDarkTower

as someone who hasn't read The Dark Tower… this trailer makes it look like a generic action/fantasy movie about boring growly men.

I was…expecting more from "The Dark Tower" trailer. Muddled. Not enough Man in Black.

The Dark Tower trailer looked good, thus far! I like that not too much has been revealed yet. Keep the mystery alive!

Folks, film is a vastly different medium from print. Of course the Dark Tower films are going to deviate from the books. They have to.

The Dark Tower: It may not follow the books but I do not care. I am so excited for this movie. I actually almost teared up a little.

THE DARK TOWER trailer is here. And it's awesome.https://t.co/UEQjfkuvRZ

The Overlook Hotel from The Shining in the trailer for The Dark Tower pic.twitter.com/oVacqwIDei

Can't wait for the dark tower movie. But I'm disappointed , Roland should have blue eyes. It's really important. @StephenKing #TheDarkTower

How AMAZING would The Dark Tower be w/out MMcC?! As is, I don't think I could watch it. He's a dealbreaker for me.

Ugh. The Dark Tower trailer shows Roland reloading his revolvers in 3 different ways. Only 1 of them is good. The others are BS.

Big fan of the use of the score from For A Few Dollars More for The Dark Tower trailer.

I can't believe they decided to base 'The Dark Tower' on the 80's board game instead of the Stephen King books. Thanks 4 nothing Hollywoods!

I have a few opinions on the dark tower trailer. 1: Doris Elba looks amazing as Roland. End of discussion. 2. I'm worried at how condensed

So, they're calling The Dark Tower movie a sequel to the books because they wanted to write whatever the fuck they wanted. Got it …

When you want to be excited about THE DARK TOWER but then Akiva Goldsman's screenwriting credit pops up pic.twitter.com/gpE1Yunkl7