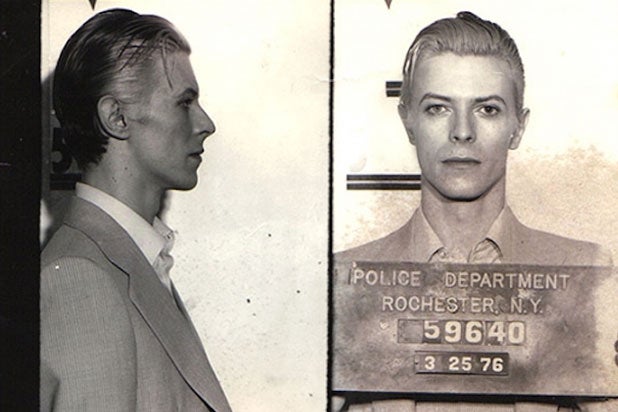 David Bowie may have posed for the slickest celebrity mugshot of all time.

Standing out from the tributes to the recently deceased rock star on Monday was a Gawker post that recalled the time he was busted for pot with Iggy Pop in Rochester, N.Y. — and the Thin White Duke was photographed in a mugshot so suave it could have been a publicity shot.

According to Democrat & Chronicle, Bowie and Iggy were arrested on March 21, 1976 for criminal possession of half a pound of marijuana. The charge was a Class C felony which would have meant a maximum sentence of 15 years in prison for Bowie and Iggy, but the charges were dismissed because “the grand jury declined to indict the legendary artist.”

Bowie paid everyone’s bail, and never performed in Rochester again. But his mugshot (above), which shows Bowie wearing a suit and donning slicked back hair, is one for the books.

Bowie died at the age 69 on Sunday after an 18-month battle with cancer.

“David Bowie died peacefully today surrounded by his family after a courageous 18 month battle with cancer. While many of you will share in this loss, we ask that you respect the family’s privacy during their time of grief,” reads the most recent post on the British singer-songwriter’s official Facebook page.

Bowie continued to be professionally active right up until his death. His latest album, “Blackstar,” was released Jan. 8, which marked his 69th birthday. The artist’s final record is set to be honored at a concert at Carnegie Hall on March 31 featuring the Roots, Cyndi Lauper and the Mountain Goats.