This story about David Harbour first appeared in the Down to the Wire issue of TheWrap’s Emmy magazine.

The borderline between emotion and action has been a tricky one for David Harbour, who just received his second Emmy nomination for the role of Hawkins, Indiana, sheriff Jim Hopper in “Stranger Things.”

“I’m always fascinated emotionally in the moment that someone pulls a gun, even a cop,” Harbour said of his central role in the Duffer brothers’ Netflix drama. “That action — I don’t know that I, personally, as a human being could do it. So in the action sequences, the psychology really interests me.

“And in the more emotional sequences, the behavior really interests me. Which is more of the action, I guess. It’s kind of a paradox in that way.”

Also Read: Millie Bobby Brown Speaks Out About Bullying After She Was Subject of Homophobic Memes (Video) 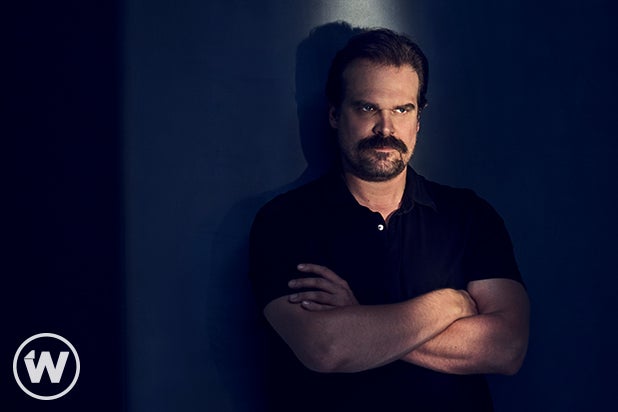 And although Harbour said that vulnerability is “the last thing” his character wants to show, it was the emotional scenes with fellow nominee Millie Bobby Brown’s Eleven in Season 2 that made the small-town police chief the internet’s favorite dad.

“We see that from the beginnings of the show, where the first image of Hopper is him hungover, on his couch, and we see a child’s drawing on the fridge,” Harbour said. “So we know that he’s a mess as a result of this lost daughter, and we get to see a lot more of that as the series goes on.”

While Season 1 approached Hopper’s vulnerability “obliquely,” Season 2 faced it more head-on. It paired Eleven, who has issues with a father figure who manipulated her, with Hopper, who’d lost his young daughter. The result, Harbour said, was “dynamic and electric” performances.

“The interesting thing about Hopper is that he’s really great in a crisis, he’s really great running around punching people and solving crimes and being a man of justice,” Harbour said. “And what’s he like when there are no crimes, and when he’s just raising a teenage daughter who’s becoming a woman — I think it is probably the greatest challenge for him. It is probably much more terrifying than any demogorgon could possibly be.”

That challenge, he said, began in Season 2 and will figure prominently in Season 3, now that the sheriff officially adopted the telekinetic tween. “There’s a lot of domestic life that happens before Season 3 begins,” he said.

And while Harbour said that his character will definitely go in some “unexpected” directions next season, he added, “It’s fair to say, without it being a spoiler, that you can assume that Hopper is at a boiling point when our story begins. And we’re going to see him grapple with those issues throughout the season.”

Watch a video interview with David Harbour above. To read more of TheWrap’s Down to the Wire issue, click here.