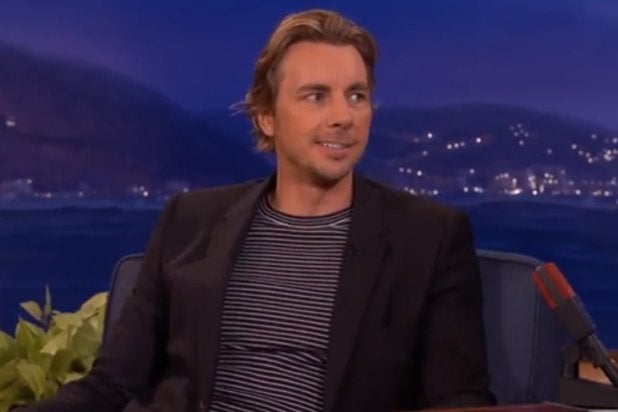 If you happen to see the film “This Is Where I Leave You” and find yourself appreciative that Dax Shepard doesn’t have a werewolf trying to escape from between his cheeks during his nude scene, just know that someone paid a very high price for that.

Shepard appeared on “Conan” where he revealed that he subjected his poor wife, Kristen Bell, to the task of trimming the “forest in the valley,” as Andy Richter put it. He was concerned that he might be too hairy in one particular area during the scene.

See video: Dax Shepard Says He Would Totally Have an Affair With Brad Pitt

“My deep, deep fear would [be that it] look like there was a werewolf trying to escape my butt crack,” he explained earnestly.

O’Brien couldn’t believe that he didn’t just have this professionally done, but he said he would never be comfortable with that … before admitting that he wasn’t comfortable with Bell doing it, either.

She clearly went to her own happy place in her mind as she worked, though, humming “Funkytown” by Lipps Inc., according to Shepard.

“It was a terrible experience,” he concluded. Maybe it was his choice of grooming equipment: “Just an off-the-shelf electric razor that you would trim your dog with.”

Fans can see if all that hard work paid off by catching “This Is Where I Leave You,” in theaters now. and Tina Fey star alongside Adam Driver, , Corey Stoll, Timothy Olyphant, Kathryn Hahn, Connie Britton and Jane Fonda. Written by Jonathan Tropper, directed and produced alongside Jeffrey Levine and Paula Weinstein.