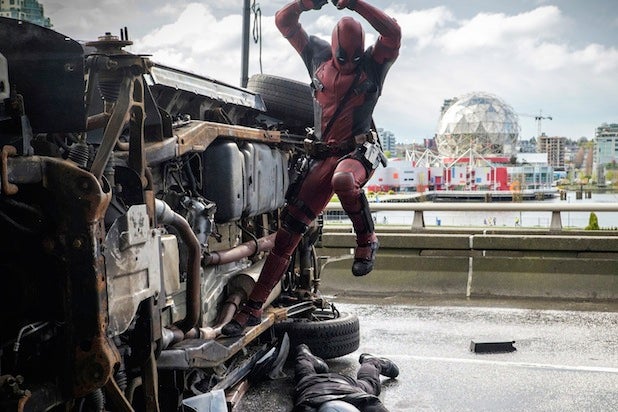 “Deadpool” started off the weekend with a whopping $12.7 million haul from Thursday night screenings, breaking two records for the largest February preview ever, as well as the largest R-rated Thursday preview ever.

That puts Fox’s raunchy superhero flick starring Ryan Reynolds on track to open to over at $70 million.

The movie, co-starring Morena Baccarin and Ed Skrein, was initially tracking for $35 million, but Fox’s stellar marketing campaign and positive word of mouth after a surprise screening boosted its estimates, and some experts say it could reach $80 million this weekend.

“Deadpool,” directed by Tim Miller, was certified “Fresh” on Rotten Tomatoes on Thursday and currently boasts a score of 84 percent. Marvel’s latest follows Wade (Reynolds), a mercenary who is subjected to an experiment that leaves him mutilated and with powers he never had before.

“Deadpool” also blitzed a bunch of opening records in its debut at the overseas box office and rung up $14 million, Fox announced on Thursday. This should give the film some major momentum heading into its wide opening on Friday.

It has also shattered multiple records its first day abroad: It delivered the best single-day debut for an R-rated Fox movie ever in the U.K. ($3.4 million), Taiwan ($1.4 million) and Hong Kong ($650,000, a Chinese New Year record) on Wednesday. It set IMAX single-day records in Taiwan and Hong Kong, and was off to a fast start in Australia with $2.1 million on Thursday.

The film had a $50 million production budget.

Also opening this weekend is Ben Stiller‘s “Zoolander No. 2,” the long awaited sequel to 2001’s original. It is looking to gross somewhere in the mid- to high-$20 million range this weekend.

“Zoolander 2” returns Owen Wilson and Will Ferrell from the original film, which opened to $15 million in September of 2001 but became a huge hit on DVD. Penelope Cruz and Kristen Wiig join the cast of the sequel, which is directed by Stiller from a screenplay written by Justin Theroux, Stiller, John Hamburg and Nicholas Stoller.

Zoolander (Stiller) and his power pout attempt to stave off a bid for world domination by an evil mastermind in the comedy, produced for $50 million by Red Hour and Scott Rudin Productions. Stuart Cornfeld, Clayton Townsend, Rudin and Stiller produce.

Currently, the movie has a 19 percent “Rotten” score on Rotten Tomatoes.

Also Read: 'Zoolander 2' Is a 'Stumble Down the Catwalk' and 8 Other Painful Reviews

“How to Be Single,” the romantic comedy starring Rebel Wilson, Dakota Johnson, Leslie Mann and Alison Brie, grossed a modest $700,000 on Thursday. It’s looking to gross somewhere in the mid-$20 million range based on a $38 million budget.

Christian Ditter directs from a script written by Abby Kohn and Marc Silverstein and based on the novel of the same name by Liz Tuccillo.

The film follows Alice (Johnson) who decides to break up with her long-term boyfriend and moves to New York to start a job as a paralegal. Robin (Wilson) helps her navigate through a new city, learning how to score free drinks, meet plenty of men and enjoy the lifestyle of being single.

The comedy currently holds a score of 50 percent on Rotten Tomatoes.