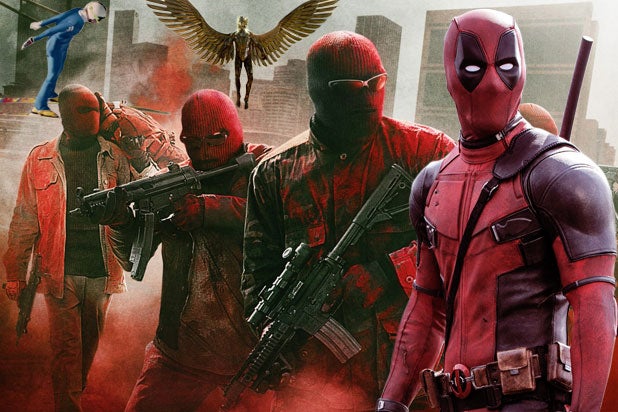 Fox’s  juggernaut “Deadpool” will deliver another box-office beatdown this weekend, industry analysts say, with the Ryan Reynolds superhero sendup rolling up another $25 million in its third straight weekend triumph.

The effects-laden sword-and-sandals epic “Gods of Egypt,” the tale of British ski jumper “Eddie the Eagle” and the gritty cops-and-robbers drama “Triple 9” will absorb the blows. They’re all expected to come in with between $7 million and $10 million this weekend.

Those are okay numbers for Open Road Films, which rolls out “Triple 9,” and Fox, the “Eddie the Eagle” distributor, since both films each cost less than $30 million. They won’t be as satisfying for Lionsgate, which is behind the $140 million “Gods and Egypt,” even though much of that was defrayed by a major tax credit from the Australian government to get the film shot down under.

The  R-rated “Deadpool” is still the big story, and its numbers are eye-popping. The story of the “Merc With a Mouth” crossed $500 million in worldwide box-office receipts on Tuesday, it’s 11th day in release, and that’s on a $58 million budget.

Open Road has mounted a significant marketing campaign behind the thriller, which is at 57 percent fresh on Rotten Tomatoes and has a higher social-media profile than “Nightcrawler,” another Open Road crime drama that opened to around $10 million in October of 2014. “Triple 9” will be in 2,158 theaters.

Critics have it at a strong 78 percent positive on Rotten Tomatoes; its social-media profile compares with that of “McFarland, USA,” another sports saga that debuted to $11 million last February. It will be in around 2,000 theaters.

Also Read: 'Gods of Egypt' on Track for $15 Million Opening - Can It Beat the Odds and Launch a Franchise?

“Gods of Egypt” is directed by Australian Alex Proyas, who earlier oversaw “I, Robot” and the cult hit “Dark City,” along with Brandon Lee’s “The Crow.”

Matt Sazama and Burk Sharpless wrote the screenplay, which follows mortal hero Bek (Brenton Thwaites) on his journey to save the world and rescue his true love. He enlists the help of the powerful god Horus (Nikolaj Coster-Waldau) in an unlikely alliance against Set (Gerard Butler), the merciless god of darkness, who has plunged the empire into chaos and conflict. Also in the cast are Elodie Young, Chadwick Boseman and Geoffrey Rush.

The film drew fire last year when posters featuring its essentially all-white cast were released, and Lionsgate and Proyas apologized for the historically inaccurate casting.

It hasn’t been reviewed yet, but its social-media profile is ominously comparable to that of “Seventh Son,” an expensive action fantasy that tanked last February. “Gods and Egypt” will be in around 3,000 theaters.

One film that won’t be opening wide is “Crouching Tiger, Hidden Dragon: Sword of Destiny.” Instead it will be available for streaming via Netflix and play on a handful of IMAX screens.