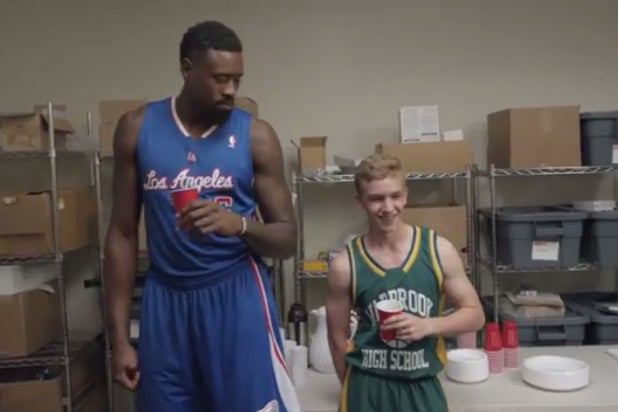 Sports fans of a certain era grew up with ESPN, its flagship news and highlights show “SportsCenter” and the brilliant advertising campaign behind the phenomena.

The latest “This Is ‘SportsCenter'” 30-second installment debuted Thurday, and it is an homage to one of the show’s most-celebrated segments: the Top 10.

The clip highlights Los Angeles Clippers center DeAndre Jordan’s welcoming entry to the coveted Top 10 Club, a privilege he earned due to his frequent rim-shaking slam dunk appearances on the “SportsCenter” Top 10 segment.

Additional members of the inner circle include anonymous competitive eater, Eater X, an actor as the bass drummer from the University of Texas Longhorn Band and University of Connecticut’s Jonathan the Husky.

There’s also a real dog, a Lumberjack Games participant and a high school hoops player who once hit a full-court buzzer beater to gain entry.

While “SportsCenter” anchor Stuart Scott romanticizes what the Top 10 Club might be like, it’s essentially the lamest party ever, taking place in a stock room with a bunch of unknowns sharing their individual 15-minutes of fame stories.

The campaign was developed in collaboration with creative agency Wieden + Kennedy New York.