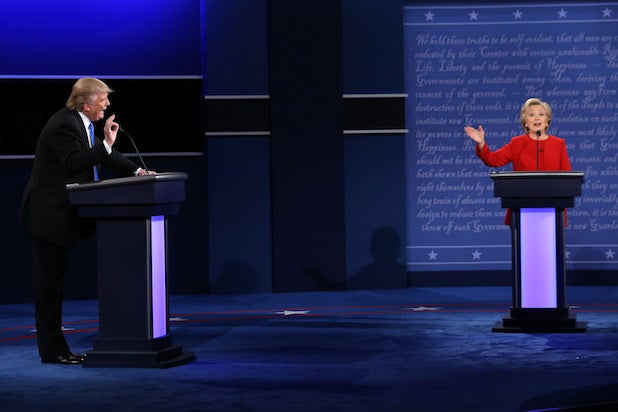 The Wrap has partnered with Canvs, a language analytics company that measures emotions around content, for a weekly look at the characters and stars that have TV viewers the most worked up. Based on that data, we usually name the social media MVPs of the past seven days — but you already know who they are: Donald Trump and Hillary Clinton, who starred in the most-watched presidential debate ever on Monday night, in the process completely dominating social media.

So in this week’s edition, we’re taking a deeper dive into why and how viewers reacted to Trump and Clinton. Here are some highlights and lowlights from the 3,590,531 specific Emotional Reactions (ERs) in response to the debate as identified by Canvs

Dislike was the night’s predominant ER, and it spiked for Trump in response to his discussion about how he’s being audited by the IRS and his refusal to release his tax returns.

Isn't being audited for 15 years kind of sketchy? #debates

Dislike also spiked for Trump while he was expressing support for stop-and-frisk as a policing strategy.

Trump sounds so damn stupid on race relations and the police!! #PresidentialDebate

Trump talks about Stop and Frisk as if it fixed the crime problem. This is simply untrue.

Dislike ERs around Clinton weren’t so much attached to particular moments as they were sprinkled throughout the debate by those who simply don’t like her.

Hillary is such a liar

That said, the portion of the debate in which she addressed her use of a private email server while serving as secretary of state caused a spike in dislike responses — though many of those responses expressed weariness about the topic itself.

Oh no not the emails #debatenight

Hillary Clinton the biggest liar in the world. 33,000 emails deleted…

I'm so tired of hearing about those emails #debatenight

Trump dominated crazy ERs, particularly when he talked about how great his temperament is, near the end of the debate.

Trump also dominated funny ERs — and Clinton played a supporting role in the inadvertent comedy given her apparent inability to contain her laughter in response to some of Trump’s pronouncements.

Trump be cracking me up

Hillary's faces are killing me. LMAO.

Incidentally, two of the most shared reactions of the night in the crazy category came from Bernie Sanders, in response to Trump’s justification for his past birtherism, and from Bill Maher, in response to a moment when Hillary Clinton looked right into the camera while Trump was talking.

This is crazy. After trying to delegitimize Obama's presidency now Trump says he did the country a favor. #debatenight

Holy fuck, Hillary just did a Jim-from-The Office direct to camera take! Which Says. It. All. #debatenight