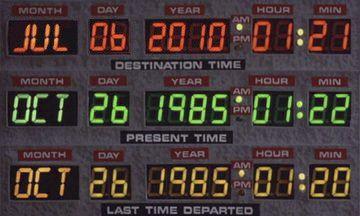 Robert Zemeckis' "Back to the Future" celebrated its 25th anniversary yesterday, which prompted some enterprising fans to create a hoax surrounding the date that Marty McFly (Michael J. Fox) arrives in the future.

Then Total Film had the nerve to ask people to retweet their apology/confession and Digg the story they wrote about the whole "scandal." Um, is it possible to anti-Digg this story. Someone needs to invent Buryy, to prevent people from passing along lame stories like the one perpetrated by Total Film.

As for "Future Day," the closest similar date is, in fact, October 21, 2015, when"Back to the Future II" actually takes place, so hop off your hoverboards mark your calendars accordingly!