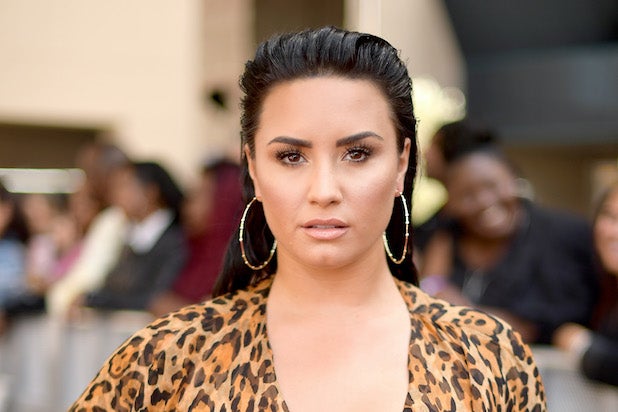 Stars have taken to Twitter to show their support for pop star Demi Lovato, who was hospitalized on Tuesday after an apparent heroin overdose. The hashtag #PrayForDemi also became a top trend on Twitter as a result of an outpouring from the singer’s many fans.

The 25-year-old singer had previously shared that she had relapsed following a period of sobriety, hinted at in her song, “Sober.”

TMZ reported that Lovato is currently being treated at a Los Angeles hospital, after being picked up at a Hollywood Hills Home.

A spokesperson for the Los Angeles Police Department told TheWrap that LAPD responded to a medical emergency on Tuesday at the 8000 block of Laurel View Drive in the Hollywood Hills — which is the area where Lovato resides. An official at the Los Angeles Fire Department confirmed to TheWrap the incident involved a 25-year-old woman and they received the call to respond 11:22 a.m. The individual is currently in unknown condition.

Ellen Degeneres wrote, “It breaks my heart that she is going through this. She is a light in this world, and I am sending my love to her and her family.”

Other singers, including Brad Paisley, Lily Allen and The Wanted band member Nathan Sykes also sent their love and prayers to Lovato.

See what people are saying:

I love @DDLovato so much. It breaks my heart that she is going through this. She is a light in this world, and I am sending my love to her and her family.

Poor beautiful spirit @ddlovato I hope she’s ok, and that she makes a full recovery soon.

Heartbroken to hear what our friend @ddlovato is going through right now. Sending all the love and positive vibes to her and her family. ????

My friend @ddlovato is one of the kindest, most talented people I’ve ever met. Praying for her right now, addiction is a terrifying disease. There is no one more honest or brave than this woman.

Heartbroken to hear what our friend @ddlovato is going through right now. Sending all the love and positive vibes to her and her family. ????

Hang in there @ddlovato – sending good energy and love.

Lovato discussed her experience with addiction in her 2017 documentary, “Demi Lovato: Simply Complicated.” In it she shared that after she first attempted to get sober at age 18, she would still sneak cocaine onto planes and bathrooms.

Lovato’s TV credits include playing a recurring character on “Glee” and two-season judging stint on the U.S. version of “The X Factor,” which she left in 2013 to focus on her music.

A rep for Lovato did not immediately respond to TheWrap’s request for comment.

27 Club: Stars Who Died at Age 27, From Jimi Hendrix to Amy Winehouse (Photos)