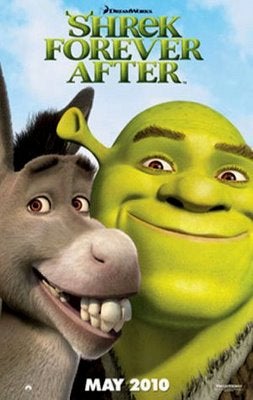 DGC/Interscope Records has announced the track listing for the "Shrek Forever After" soundtrack and surprisingly, it features an eclectic mix of some of my favorite bands.

Weezer has covered The Monkees’ "I’m a Believer" for the soundtrack, bringing the series full-circle as the original "Shrek" soundtrack featured not one, but two covers of the same song, courtesy of Smash Mouth and Eddie Murphy, who plays Donkey in the beloved animated series.

Besides a handful of audio cuts from the film, the soundtrack features a wide variety of cross-generational acts, ranging from the old (Lionel Richie, The Carpenters) to the new (Scissor Sisters, Landon Pigg and Lucy Schwartz), with the Beastie Boys, Mike Simpson of The Dust Brothers and Puss ‘N Boots himself (Antonio Banderas) thrown in for good measure.

While DreamWorks Animation’s "Shrek Forever After" hits theaters May 21, DGC/Interscope will release the soundtrack on May 18. However, the physical CD will only be available at WalMart, so if you don’t live near one of those (and who doesn’t, really?), you’ll have to buy the album online from iTunes or another digital music retailer.

Here’s the full track list for the "Shrek Forever After" soundtrack: