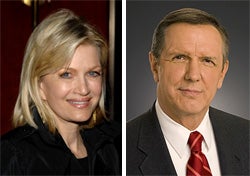 ABC News announced Wednesday that Charles Gibson, anchor of ABC’s “World News,” will retire at the end of the year.

Diane Sawyer, anchor of "Good Morning America," will replace him.

Gibson had served as “World News” anchor since May 2006.

“It has not been an easy decision to make,” Gibson wrote in an e-mail to staffers. “This has been my professional home for almost 35 years. And I love this news department, and all who work in it, to the depths of my soul.”

Sawyer will become the second woman — alongside CBS’ Katie Couric — to anchor a network’s evening news. It’s a seat she has long coveted — even before Gibson got the gig.

"Diane Sawyer is the right person to succeed Charlie and build on what he has accomplished," ABC News president Davis Westin said in a statement. "She has an outstanding and varied career in television journalism, beginning with her role as a State Department correspondent and continuing at 60 Minutes, Primetime Live, and most recently Good Morning America."

Gibson took the role as “World News” following the death of Peter Jennings. “He stepped in to lead World News after a difficult and turbulent time — both for the broadcast and for ABC News over all,” Westin said. “We suffered from the loss of Peter and then the severe injuries to Bob” Woodward, who was injured by a roadside bomb while reporting in Iraq.

Gibson said it had been his “intention to step down” from “Good Morning America” in 2007, but was persuaded by Westin to stay on.

“I have told David I would like to continue in some capacity contributing occasionally to ABC News,” Gibson wrote. “He has been receptive to the idea — and we will be discussing what that role might be.”