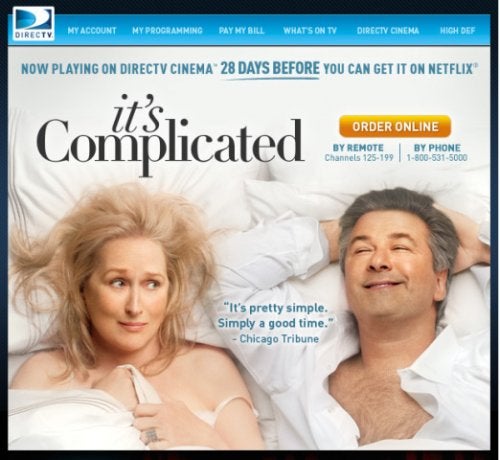 DirecTV is taking advantage of Netflix’s 28-day-delay deal with Universal in its new promotional campaign.

A recent email promotion notes that subscribers to the satellite provider won’t have to wait out the four-week window to see Meryl Streep’s rom-com "It’s Complicated."

These pacts — signed between Fox, Warner and Univesal and Netflix  — prevent the rental company from offering new releases to customers for 28 days after they hit stores.

In return, Netflix gets greater access to the studios’ catalogue titles for its streaming service and can purchase recent releases at a discount. Kiosk service Redbox has signed similar agreements with the three studios.

DirecTV was unabashed about its decision to call out Netflix by name.

"We obviously compete with Netflix in the PPV/VOD arena and we’re not going to be shy about reminding our customers of the value and benefits of their DIRECTV Cinema service – and one of those bennies in this instance is getting this hit movie 28 days in advance," Robert Mercer, a spokesperson for the satellite service, told TheWrap.

Reached by TheWrap, Steve Swasey, a spokesperson for Netflix, did not directly address DirecTV’s ad, but said: "We don’t put premium on new releases. The agreements we reached with studios are win, win for us and for our customers. It gives them access to more movies than they could watch in a lifetime."

Swasey went on to cite Netflix’s most recent quarter, which saw its ranks swell to a record 1.7 million subscribers, as evidence that the company has not experienced any backlash from its new release policy.