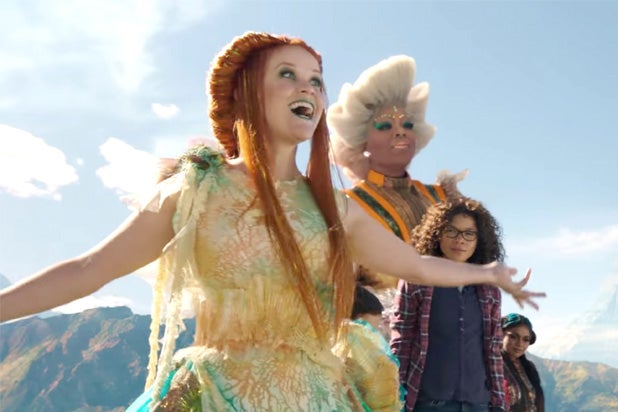 Ava DuVernay’s “A Wrinkle in Time” grossed $1.3 million at the Thursday box office.

When tracking for the adaptation of Madeleine L’Engle’s sci-fi novel first came out three weeks ago, opening weekend estimates were set at approximately $35 million against a production budget of at least $103 million, according to California Film Commission reports.

The closest competition for “Wrinkle in Time” would be Disney’s 2015 flop “Tomorrowland,” which opened to $33 million and ended up making $209.1 million against a $190 million budget before marketing costs.  That film grossed $725,000 from a limited run in 701 U.S. theaters. “Alice Through the Looking Glass” earned $1.5 million before it opened to $34 million its opening weekend in 2016.

Disney’s “Black Panther” is expected to earn in the same range as “Wrinkle in Time” this weekend: $35 million to $40 million. Since it has kept first place at the box office since its debut on Feb. 16 and if it ends up topping “Wrinkle” to take the No. 1 spot again, it will become the first movie since “Star Wars: The Force Awakens” to finish at No. 1 for four straight weekends.

Also Read: 'A Wrinkle In Time': What Is a Tesseract, and Why Does It Sound Familiar?

The Marvel film has grossed $516 million domestically and $930 million globally so far.

Outside of this weekend’s Disney vs. Disney showdown, three other films are getting wide release on 2,400-2,500 screens. Leading them is Aviron’s horror film “The Strangers: Prey at Night,” which is tracking for a $6-8 million start. Also coming out is “Gringo,” an action comedy starring David Oyelowo, Charlize Theron and Joel Edgerton that will be co-distributed by Amazon Studios and STX; along with Entertainment Studios’ action drama “The Hurricane Heist.” Both of those films are tracking for a $3-4 million start.