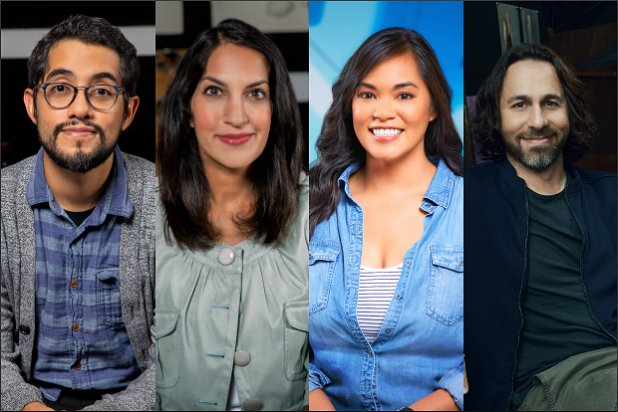 Four filmmakers have have been hired as directors at Walt Disney Animation Studios (WDAS), the company announced on Tuesday. Two of the directors are veteran story artists, whose careers have grown at WDAS, and the two directors who are new to the studio have both directed acclaimed films.

“We aim to have Walt Disney Animation Studios serve as the premiere home for filmmakers interested in telling engaging stories within the limitless animation medium,” WDAS Chief Creative Officer Jennifer Lee said in a statement to TheWrap. “Carlos and Suzi are two incredible, inventive filmmakers who have both received acclaim for their work. Josie and Marc, master, lead story artists, have been instrumental in shaping such films as ‘Zootopia’ and ‘Frozen 2.’ We are so thrilled to have these four talented artists join our 96-year-old studio as directors and help us build the stories of our future – adventures in completely original worlds, stories from around the globe, and the next generation of musicals.”

Carlos Lopez Estrada’s debut film, “Blindspotting,” premiered opening night at Sundance 2018 and subsequently sold to Lionsgate for a theatrical release. The film was produced by Snoot Entertainment and stars Daveed Diggs. Carlos was selected for Variety’s 10 Directors to Watch for 2018 list and was recently nominated by the DGA for Outstanding Directorial Achievement of a First-Time Feature Film Director for 2018. On the TV side, Carlos recently wrapped an episode of FX’s “Legion” and has an original piece in development at UCP.

Suzi Yoonessi directed the award-winning Duplass Brothers film “Unlovable” and indie darling “Dear Lemon Lima.” She also directed Scooby Doo origins film “Daphne and Velma” for Warner Brothers and short films for Funny or Die and Super Deluxe. Her documentary “Vern” is in the permanent collection of the San Francisco Museum of Modern Art. Her other credits include “The Dead Girls Detective Agency,” “Relationship Status” and “Insatiable.”

Josie Trinidad was head of Story on Walt Disney Animation Studios’ “Ralph Breaks the Internet” and co-head of story on the Oscar-winning “Zootopia.” On those films, Trinidad oversaw the story team, which is responsible for translating the script to its first visual form. Trinidad joined Disney in 2004 as a story apprentice. Once she completed training, she was hired as a story artist. Her Disney credits also include “Wreck-It Ralph,” “Tangled” and “The Princess and the Frog.”

Marc Smith is the story director for the upcoming WDAS feature “Frozen 2,” in theaters November 22, 2019. Along with the story team, Smith is responsible for getting the directors’ vision for the story on screen. He helps build the story and oversees the story boarding team. Smith joined Disney in 1993 as an intern at Walt Disney World. Since joining Walt Disney Animation Studios, he has worked on “Treasure Planet” as supervising animator, “Tangled” and “Frozen” in the story department, and “Big Hero 6” and “Zootopia” as a story lead.