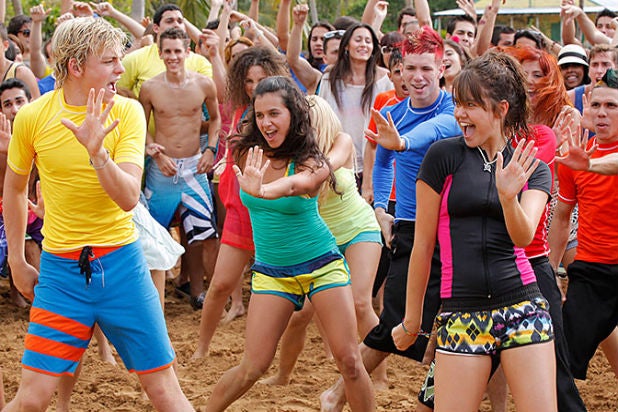 The Disney Channel is ready for summer with two new original movies.

“Teen Beach 2” and “Best Friends Whenever” will both premiere on Friday, June 26, the network announced on Wednesday.

The sequel to the “Teen Beach Movie” (which ranks as the second highest-rated cable television movie of all time), “Teen Beach 2” (pictured above) is a surf and song musical that picks up the action at the close of summer. Brady and Mack are heading back to high school until they receive a surprise real-world visit from their 1960s silver screen friends, Lela and Tanner, who have remarkably departed “Wet Side Story,” quickly followed by their 1960s bikers and surfer friends led by Butchy, Cheechee and Seacat. Knowing first-hand that the “real” world and the movie world don’t mix, Mack, Brady and all of the “Wet Side Story” friends must quickly devise a plan and use the magic of Lela’s necklace to get everyone back to their movie world before it’s too late.

Meanwhile, “Best Friends Whenever” tells the story of a science experiment gone wrong after Shelby (Lauren Taylor) and Cyd (Landry Bender) gain the power to leap forward and backward in time whenever they want, and sometimes when they don’t. Now, the duo experience the twists and turns of friendship as they try to decide between fixing mistakes in the past or catching a glimpse of the future. While aspiring scientist Barry and his trusty assistant Naldo try to figure out how to replicate time travel for themselves, Cyd and Shelby use their newfound power to navigate high school, life and Shelby’s mischievous twin brothers Bret and Chet.

“Teen Beach 2” premieres at 8 p.m. on June 26 on the Disney Channel, followed by “Best Friends Whenever.”