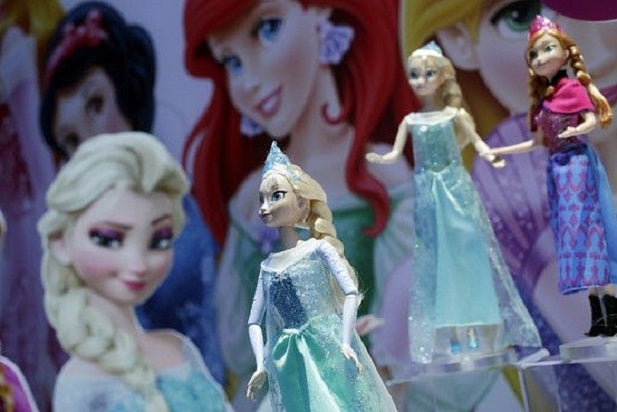 The Walt Disney Company’s stock soared to an all-time high Tuesday after it reported better-than-expected earnings of $2.1 billion for its second fiscal quarter, driven by strong theme park business and sales of “Frozen” merchandise.

Earnings per share increased 14 percent to $1.23 from $1.08 in the prior-year quarter for Disney, which has topped earnings-per-share estimates in every quarter for four consecutive years.

The net income figure was up 10 percent vs. last year and the revenues of $12.5 billion were up seven percent. Analysts had projected revenues of $12.25 billion and earnings per share of $1.10, so both numbers were positives.

Disney shares, which surged 2 percent to around $113 per share in early trading, have gained 18 percent in the first four months of 2015, driven in part by anticipation of the release of the first “Star Wars” movie in a decade.

The surprisingly upbeat report was mainly powered by a 32 percent rise in consumer products profit and a 24 percent profit hike at the theme parks, which had installed price increases in California and Florida resorts, and saw revenue jump to $566 million.

Those offset a relatively weak quarter by the film unit, but Iger couldn’t resist calling attention to a certain comic book movie sequel, which opened to $191 million at the box office over the weekend, the second-best debut in history.

“The power of this winning combination is once again reflected in the phenomenal worldwide success of Marvel’s ‘Avengers: Age of Ultron,’ which has opened at No. 1 in every market so far,” he said.

Last year’s second quarter was a tough act to follow, since it was driven by the huge success of the movie “Frozen.” The biggest animated box-office hit ever was still contributing, and sales of merchandise based on the princess movie drove consumer product revenues to a 10 percent gain to $971 million.

Film studio revenues for the quarter decreased 6 percent to $1.7 billion and operating income fell 10 percent to $427 million. That was due to drops in home entertainment and foreign box office returns. The animated film “Big Hero 6” generated $652 million in box office, but failed to match the revenues generated by “Frozen” a year earlier.

In TV, broadcast numbers rose sharply and cable was down, mainly due to higher costs.

ABC saw its revenues gain 19 percent to $1.8 billion with operating income up 90 percent to $302 million. Ad sales increased, behind “higher prime time ratings and rates.” The unit also benefited from sales of programming including Marvel’s “Daredevil,” “Lost” and “Once Upon a Time.”

The cable unit saw an 11 percent increase in revenues to $4 billion, and operating income fell 9 percent to $1.8 billion as ad sales and affiliate fees were up at ESPN. Programming costs also rose with the addition of bowl games, an NFL wild card playoff and the launch of the SEC Network.

Interactive revenues for the quarter decreased 12 percent to $235 million and operating income increased by $12 million to $26 million. The operating gain was due lower marketing and product development costs and the success of the mobile game “Tsum Tsum.”

That partially offset lower numbers for the Disney Infinity video game and a decrease in sales of mobile game catalog titles. Lower marketing and product development costs were driven by fewer titles in development and previous restructuring.

With the funeral for David Goldberg scheduled later in the day, the timing of the report was moved forward to give Disney executives and their families time to attend the services for the CEO of SurveyMonkey and husband of Facebook COO Sheryl Sandberg, a member of the Disney board.